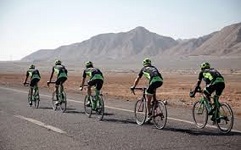 ZIMBABWE – Zimbabwean cyclist David Martin set a world record for the fastest man cycling across Africa from Cairo to Cape Town when he achieved the feat in 38 days, 16 hours and 11 minutes last month.

The previous record was 42 days.

The 37-year-old cyclist, who was born in Gweru and grew up in Marondera, took on the adventurous tour with five other cyclists, but only him and two other cyclists Nicholas Bourne from United Kingdom and South African Mark Blewett were able to complete the journey and reach Cape Town.

The journey began from Egypt and took them to the borders of Sudan, Ethiopia, Kenya, Tanzania, Zambia, Zimbabwe, Botswana and finished off in South Africa.

Yesterday, Martin, who is also director of Fit Freaks and a cyclist coach, was hosted by British Ambassador Catriona Laing, in a brief ceremony at the embassy offices.

Martin narrated the adventurous journey which saw them receiving excellent and warm reception in countries such as Zambia, Zimbabwe, Tanzania and Kenya and also met with hostility in countries like Ethiopia while there were complaints of unbearable weather conditions in Sudan.

“I know most people will ask why I did this and I also often wonder, but there are two reasons, to put Zimbabwe cycling on the map so that people find that it is a cycling destination.

“The pride of wearing the national jersey and I remember in Zambia, Zimbabwean truck drivers cheering me. It was amazing representing my country.

“I also wanted to do an adventure and my friends and everyone was proud of me,” he said.

Martin said he had eight punctures throughout the entire trip while the Briton who was a bit heavier than him had 20 punc- tures.

“We would cycle for 320km in the morning and cover some ground when it was still cool and then from there, after every 50km we would take a break. We had a team of 10 people including the supporting staff of truck drivers, cook, manager and a mechanic.

“The preparations started in 2013 and we were supposed to cycle last year. I had to raise £5 000 to do it and started with some fund-raising activities here at Sam Levy’s.

“We had big problems with Sudan and Ethiopia in terms of visas.

“In Egypt, they mostly had amazing roads and friendly people and in Sudan the temperatures were extreme.

“But it was in Ethiopia which was terrible and we spent three days there. The people would throw stones and hurl insults, but we still had one Kenyan who later dropped, but he was not subjected to all that as he was one of their own.

“I have stayed in Zimbabwe and I grew up here, but I have never experienced that, we are just one people” said Martin.

The cyclist said a lot was going through his mind when he was cycling, but as a Christian he used the time to pray and worship.

Martin also revealed that he fell sick in South Africa before reaching the destination, but support from his friends who had to fly from Dubai to cheer him to the final point motivated him.

Last night Minister of Sport and Recreation Makhosini Hlongwane congratulated the cyclist and said he had brought the spotlight on the sport.

“I want to congratulate David Martin for breaking the record of cycling across Africa from Cairo to Cape in 38 days.

“The previous record was 42 days. Martin’s heart-rending story as he and his colleagues cycled through Africa tells the untold story of the potential of Zimbabwean sport and has brought the spotlight on cycling, reminding all of us that Zimbabwe can be as before, a cycling powerhouse.

“Martin displayed the Zimbabwean flag with pride hoisting tall brand Zimbabwe, but most importantly showing our diversity as a people to the world and the tenacity of Zimbabweans in all sporting endeavours.

“We want our athletes to follow the example of David Martin and to conquer Mount Kilimanjaro, Mount Everest and so forth. I challenge our mountain climbers to come out and make Zimbabwe proud.

“The spirit of Zimbabwean sport exudes in the courage to conquer, the pride to represent our country as a diverse people and the will power to win for Zimbabwe,” said Hlongwane.

ZIMBABWE - Zimbabwean cyclist David Martin set a world record for the fastest man cycling across Africa from Cairo to Cape Town when he achieved the feat in 38 days, 16 hours and 11 minutes last month. The previous record was 42 days. The 37-year-old cycli...
Share via
x
More Information