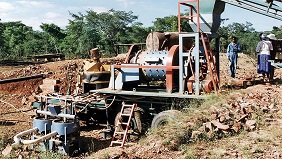 ZIMBABWE – Low commodity prices and high electricity costs have had an adverse effect on Zimbabwe’s mines which is set to contract a third consecutive year after 70 percent of the industry recorded losses in 2015, a survey showed on Thursday.

Mining is the biggest export earner in the southern African nation, but its contribution to earnings has declined from a high of 57 percent in 2012 to 50 percent last year after the global prices of its major minerals, gold and platinum, fell.

The survey commissioned by the Chamber of Mines of Zimbabwe, which represents major mining firms, showed that
the industry will not afford wage rises this year.

A fifth of the firms have already agreed with workers to cut pay to remain viable, the survey said.

The majority of mines had increased salaries 11 times since 2009, when Zimbabwe ditched its inflation-ravaged currency in favour of foreign currencies. The mining minimum monthly wage is $248.

“All mining houses interviewed said that they will not afford any salary increments in 2016, while 22 percent reported that they have negotiated and agreed salary reductions with their employees,” a statement on the survey said.

Mining sector wage negotiations in Zimbabwe, which holds the world’s second largest platinum deposits, often pass without incident unlike in South Africa, which has in the past seen violent wildcat strikes over salaries.