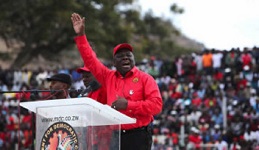 ZIMBABWE – before the Movement for Democratic Change (MDC) is scheduled to hold its second elective congress, there are moves within its ranks to purge individuals accused of destabilising the party.

In a hard-hitting statement issued recently, the party said it was ready to take decisive action to weed out corrupt elements.

“The standing committee noted that there were a few members of the leadership, within the national executive committee who have of late engaged in nefarious activities contrary to the party constitution and calculated to undermine the interests of the party, and resolved to refer these individuals to the national disciplinary committee in terms of the party constitution to be dealt with in accordance with the available evidence,”part of the statement said.

While party insiders said the purges were meant to strengthen Welshman Ncube’s political hand as president of the MDC, and enhance his chances for re-election, there are indications that the plan could ricochet.

Ncube has been at the helm of the splinter MDC since 2011 when he took over leadership from Arthur Mutambara.

At the time, his victory was celebrated as necessary for the re-invigoration of the party’s structures, which were almost non-existent.

The palpable excitement over Ncube’s rein soon gave way to ructions as disgruntlement over his leadership style emerged.

Many fear the purges might be resisted by party members.

There has already been serious mobilisation in some provinces to resist Ncube’s continued leadership of the MDC.

A petition calling for his resignation has been doing the rounds in the party’s corridors and is understood to have been signed by at least 60 party members so far.

The petition, seen by the Financial Gazette, alleges Ncube has been involved in acts that make him unsuitable for leadership.

Part of the petition reads: “You have at some point, when you were still secretary-general of the party been accused by one former female employee of the party for sexual harassment. This has undoubtedly dented the image of the party. In view of all these flaws, it is our concrete conviction that you have dismally failed to lead the party. We know not any success story in the party, which can be associated with your tenure of leadership… “

Ncube’s popularity has been waning ever since the outcome of the 2013 general elections where he was a distant third in the presidential race.

Compounding the defeat was the failure by the MDC to clinch even a single seat in the National Assembly.

The net effect of all this was an exodus of senior party officials such as Qhubani Moyo, Frank Chamunorwa, Nhlanhla Dube and Goodrich Chimbaira, who all resigned from the MDC.

The resignation of Priscilla Misihairabwi-Mushonga from her post as the secretary-general in February last year also precipitated further speculation over the state of affairs in the party.

The lid over the brewing tensions in the party came off following the “unanimous” vote of no confidence passed on the acting secretary-general, Moses Mzila Ndlovu last weekend.

He had been the acting secretary-general since Misihairabwi’s resignation.

MDC spokesperson, Kuraoune Chihwayi, said the vote of no confidence was a culmination of profound dissatisfaction with the acting secretary-general’s ability to perform virtually all the functions of his office.

These included failure to call for meetings of the organs of the party, failure to administer party offices and party affairs, failure to prepare for the conduct of the party’s elective congress due this year and failure to implement the decisions of the standing committee.

“The acting secretary-general has failed to competently, efficiently and effectively conduct party affairs and generally failed to measure up to the demands of his office, which has included complete dereliction of duty,” Chihwayi said.

Miriam Mushayi has now been appointed to oversee the party’s secretariat department.

Chihwayi maintained that Mzila Ndlovu had not been expelled from the party, but had only been relieved of his duties.

“Mzila Ndlovu was not fired from the party, but was removed from the secretary general’s chair to unlock progress. He remains a member of the party unless fired,” said Chihwayi.

ZIMBABWE - before the Movement for Democratic Change (MDC) is scheduled to hold its second elective congress, there are moves within its ranks to purge individuals accused of destabilising the party. In a hard-hitting statement issued recently, the party ...
Share via
x
More Information