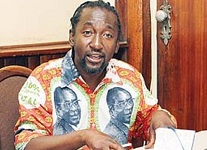 ZIMBABWE – A Zimbabwean government official has said the southern African country should instead demand between 80 and 90 per cent shareholding in foreign companies, saying the current 51 per cent was too low, a development likely to trigger a fresh flight of investors.

Patrick Zhuwao, Minister of Youth Development, Indigenisation and Economic Empowerment, warned that his ministry is crafting more stringent measures to be implemented soon.

He singled out the mining industry, saying “mining companies remain stubborn and intransigent and refuse to recognise that they don’t own a resource”.

“Fifty one per cent doesn’t make sense,” Zhuwao, who is President Robert Mugabe’s nephew, said. “If a mining company invests $100 million in infrastructure on the ground the resource they want underground will be having a value much higher than the investment.”

Zhuwao said shareholding for non-indigenous entities must be calculated on the basis of the infrastructure put on the ground in relation to the value of the resource.

“But for the time being, we’ll continue using the 51 per cent, but we want to go to 80-90 per cent, because that’s the true value of our resource,” he said.

“All they own are pieces of steel and infrastructure on the ground, which are worth only a fraction of the resource that they extract and leave us only with holes.”

Zimbabwe introduced a black empowerment law that compels foreign businesses to cede at least 51 per cent of their shareholdings to locals, but investors are wary of these regulations and have so far given the southern African nation a wide berth.

Early this year, Zhuwao, who is vigorously pushing for the implementation of the Indigenisation Act said all foreign-owned companies operating in the country that are yet to comply with the black empowerment law would be slapped with hefty penalties this year.

The southern African nation seeks to raise at least $100 million, which Zhuwao said would be used to create 2.265 million jobs by 2018.

ZIMBABWE - A Zimbabwean government official has said the southern African country should instead demand between 80 and 90 per cent shareholding in foreign companies, saying the current 51 per cent was too low, a development likely to trigger a fresh flight...
Share via
x
More Information