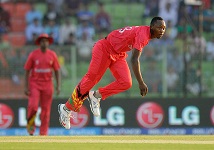 Fast bowler Tendai Chatara is back in Zimbabwe’s squad for the first time in nearly a year, after the selectors named him in the 15-man squad for the World Twenty20. Chatara, whose last international appearance came during the 2015 World Cup, suffered a fractured left leg in April 2015 and only returned to competitive cricket this January. Tinashe Panyangara, who missed the recent T20 series in Bangladesh with a back injury, is also back in their squad.

Taurai Muzarabani and Brian Vitori were the two seamers who missed out due to the return of Chatara and Panyangara. Also left out was the opening batsman Chamu Chibhabha, who was part of the squad during the Bangladesh tour but did not get an opportunity in the playing XI.

Chatara, Panyangara, Luke Jongwe and Neville Madziva make up the frontline seam options in the squad. Zimbabwe have picked three specialist spinners in Graeme Cremer, Tendai Chisoro and Wellington Masakadza, with back-up from the part-time bowling of Sean Williams and Sikandar Raza.

ZIMBABWE - Zimbabwe's changes, In: Tendai Chatara, Tinashe Panyangara Out: Chamu Chibhabha, Taurai Muzarabani, Brian Vitori Fast bowler Tendai Chatara is back in Zimbabwe's squad for the first time in nearly a year, after the selectors named him in the 1...
Share via
x
More Information
x