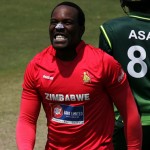 ZIMBABWE – Batsman Hamilton Masakadza has been named captain of Zimbabwe’s cricket team, replacing Elton Chigumbura who resigned on the recent tour of Bangladesh.

The 32-year-old Masakadza is the most experienced player on the Zimbabwe team having played 29 Tests and 165 one-day internationals.

Masakadza will captain in both tests and limited-overs games, with Zimbabwe deciding to do away with separate captains for the different formats.

Masakadza was previously dropped from the team for a loss of form but was one of Zimbabwe’s best players in recent one-day and Twenty20 series against Afghanistan and Bangladesh.