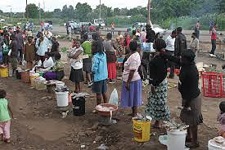 ZIMBBAWE –  is one of the best delicacies and provides a good source of protein and wide variety of vitamins and minerals. To some countries, fish is just viewed as a good source of nutrition and no one thinks about the benefit that it can add to their economies.

In Southern African countries such as Mozambique, Zambia and Zimbabwe, illegal fishing activities are not taken seriously by the authorities. Smuggling of fish in the region is rampant and happening every day, an investigation carried out by this newspaper reveals, but it gets very little attention.

Statistics from UN Comtrade show that there are variances between the trade in fish among the three countries in the region through the borders that they share.

Similarly, between 2007 and 2014, the figures show that Zambia reported that it imported $63,7m worth of fish from Zimbabwe. However, Zimbabwe reported that it exported only $38 million worth of fish to Zambia. This means that Zimbabwe lost out on taxes that again may have amounted to much-needed millions on $25,7m — the difference in this case.

Local economist Tafadzwa Chikumbu said the analysis of the value of trade in fish between Zimbabwe and Mozambique as reported by the two countries reveal huge discrepancies, implying an element of smuggling or under-invoicing, and a problem of information not being officially recorded.

In relation to the trade with Mozambique, he commented: “Over-invoicing normally happens when the traded consignment in fish is used to cover for smuggling either illegal goods or high value commodities. For all imports into Zimbabwe there are huge discrepancies as well which imply that most fish coming to Zimbabwe is smuggled or under-invoiced in Mozambique and earnings from such illegal transactions might not return there.”

A number of informed sources, in various locations along the Zambezi River, said that illegal fishing and smuggling is a phenomenally big problem along the whole river system along the Zambia — Zimbabwe border and added that some of it seems to be highly organised on the Zambian side.

The problem worsened considerably in 2000 when tourism declined dramatically and part of the problem is that the region has different jurisdictions: Some come under National Parks’ authority while others are under that of the rural district councils. The authorities don’t have enough resources to tackle the problem. Hundreds of tonnes of fish are being caught every year in some areas of the river, adding up to many millions of dollars worth throughout the entire region, they said.

A source based in Mutare in the Manicaland region on the Zimbabwean border with Mozambique said the value of a 35kg bag of fish ranges from US$130 upwards depending on the size and type of fish. He said there is a ready market in Mutare and surrounding areas, the fish is easy to transport and the area is close to various fishing waters.

“Smuggling and illicit trade is rife because of the Cahora Bassa Lake in Tete, some 300km from Mutare. There’s also the Indian Ocean port of Beira in Mozambique. Few people have been arrested for fish smuggling owing to a vast uncontrolled border between Zimbabwe and Mozambique.

“At times the operations appear to be highly organised, because I have seen 7-tonne and 11-tonne trucks offloading at places that are used by smugglers. In the Mozambique-Zimbabwe trade, the fish tends to be worth more when sold in Zimbabwe. There is duty and VAT applicable on fish imports in both countries, so gains can be made from under-reporting the figures and the taxes can be evaded altogether by the smuggling operators.”

A representative of the UN Food and Agriculture Organisation in Zimbabwe, Michael Tiki, said:

“No one really tries to record this information. Zimbabwean consumption of fish is not very big and there are few if any cases of arrest or reports on illicit trade. In relation to illegal fishing which makes the whole chain of events from the poaching to sale illicit, even fish that are legally acquired may end up being resold illegally.”

He added: “The vast majority of fish caught in Lake Chivero in Harare, for example, is sold by middlemen who have no permits or licences to sell fish. The fish is sold from buckets or trunks of cars anywhere in the high-density areas. So once the fish is on the market it becomes very difficult to trace the origin of the fish whether from registered co-operatives and fishermen or poachers. There can be a lot of people involved in a chain and it can be difficult to tell which parts are illicit.

“Zimbabwe Parks and Wildlife Management Authority (ZPWMA)-registered fishermen can sell their fish to customers who come to their landing sites where they sell fish legally. From this point on most of the buyers (middlemen) go on to sell the fish to the final consumer. These middlemen do not meet the Ministry of Health requirements for selling fish or meat which requires inspection and certification of their business. So this is a lot more about the context in which we can call this illicit trade because in my view much of the sale of fish would be called illicit. The Ministry of Finance would label all these sales illegal since no taxes would be accrued to the State from them.Very few cases, if any, wind up in courts. If they do, the sentences handed down may last only months.

“These may be unrepentant habitual offenders in the form of poachers otherwise the ZPWMA (which is the custodian of all wild living resources) has ways of addressing poaching in the form of fines. I doubt if the courts would be of any help here.

“I believe there is also an amount of illicit fish which comes from Mozambique which is smuggled into the country. Dried salted fish, commonly called bakayawo locally, is one example. Once the fish is in the country it is sold on the open market.

“One would have to be able to identify sea fish and count them as illicit because Zimbabwe is landlocked, hence cannot sell sea fish on the streets. They are illicit and an index of their prevalence would be in part determined from these markets assuming the relevant statistical research technique is used. In conclusion this information would be helpful only if illicit trade of fish and illicit acquisition of fish (poaching) coincide. I am of the notion that illicit acquisition (poaching) is probably the single indicator of illicit trade in fish.”

An expert on the impact of trans-national crime networks based in South Africa, Charles Goredema, said: “I haven’t seen anything about illegal fishing or fish trade or smuggling in the official statistics from the Zimbabwe Republic Police, court statistics and records in recent years. They are not a priority for the authorities in my view — unlike other illegal wildlife trade such as ivory poaching — and if you speak to officials, their view is that they always need more resources.”

The tax law in Zimbabwe allows firms to take advantage of the law and avoid tax within the limits of the law. For instance, tax is calculated on profit so if a company go on for years without making profits, it’s mostly likely to avoid tax at the expense of companies that would be paying tax. African Development Bank statistics in 2014 showed that the country lost $12 billion to IFFs that enriched a few individuals. Zimbabwe has been ranked sixth in Africa on IFFs between 1970-2003 by research body Ndikumana and Boyce 2008.

According to the United Nations Economic Commission for Africa (Uneca) illicit financial flows out of Africa have become a matter of major concern because of the scale and negative impact of such flows on Africa’s development and governance agenda. By some estimates, illicit flows from Africa could be as much as $50 billion per annum. Uneca shows that the figure is double the official development assistance that Africa receives and, indeed, the estimate may well be unrealistic, as accurate data does not exist for all transactions and for all African countries.

Joyce Mujuru is nothing without President Mugabe!

ZIMBBAWE -  is one of the best delicacies and provides a good source of protein and wide variety of vitamins and minerals. To some countries, fish is just viewed as a good source of nutrition and no one thinks about the benefit that it can add to their ec...
Share via
x
More Information
x