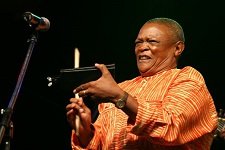 ZIMBABWE – Internationally acclaimed trumpeter, singer and songwriter, Hugh Masekela has rubbished reports that he is considering settling in Zimbabwe.

There has been speculation about the South African musician relocating to Harare where he is involved in a number of musical projects.

A source said Masekela owned a house in one of Harare’s leafy suburbs and was spotted in the capital on many ocassions.

“Masekela is a busy man and is working with Oliver Mtukudzi, Victor Kunonga and different arts groups on various projects in Zimbabwe,” said the source.

“These projects require a lot of attention and this is the reason why he wants to come and settle in Zimbabwe.”

However, Masekela who has declared Zimbabwe as his “second home”, poured cold water on the reports linking him with a move to settle in the country.

Masekela has been coming to Zimbabwe nearly every two weeks since last year where he is working on projects with local musicians.

Bra Hugh, as he is affectionately known, was part of the crowd that watched Afro-fusion outfit Mokoomba perform their first concert this year at Alliance Francaise in Harare last month.

The most-sought-after trumpeter is also working with Ngoma Nehosho Live Sessions on a number of projects, a move that has prompted him to make frequent visits to Zimbabwe.

In an exclusive interview with The Standard Style last week, Masekela’s manager Josh Georgiou said although the musician had been regularly visiting Zimbabwe, he has no intentions of relocating.

“Bra Hugh has no intention of relocating to Zimbabwe, although he is working very closely with some Zimbabwean artists, including Oliver Mtukudzi and a band called Shai Shai,” said Georgiou.

“He has been spending a lot of time in Zimbabwe recently, which is possibly where the rumours began.”

“Masekela comes here a lot to do business with us at Ngoma Nehosho, that is all I can say for now,” he said.

“He considers Zimbabwe as his second home because his family traces back to Masvingo where his uncle came from.”

Wanyanya said Masekela had recorded songs with some artists and more projects involving the South African star were in the pipeline.

He said the collaboration of his organisation with Masekela adds value to the local music industry.

“Masekela is a legend so highly placed and recognised for his estimable contribution to South African music and its place in the world,” Wanyanya said.

“For the local artists, it is an opportunity for them to be able to learn from him and get pointers on what it takes to break into the global market, which is what Bra Hugh has managed to do.

“For us, it is what we have set out to do as Ngoma Nehosho, availing artists to the best possible opportunities in entertainment. This is all part of the artists development programme we have with musicians whom we work closely with.”

Wanyanya also confirmed that Masekela was currently working on a production with Mtukudzi and Kunonga.

“Production is in progress and this is definite. Kunonga is one of the musicians who have performed and shown a level of maturity during the Ngoma Nehosho Live Sessions concerts,” said Wanyanya.

“We hosted Masekela last year for another addition of our concerts and we plan to have another concert with him later this year.”

Zimbabwe: No plans to settle in Zim – Hugh Masekela

ZIMBABWE - Internationally acclaimed trumpeter, singer and songwriter, Hugh Masekela has rubbished reports that he is considering settling in Zimbabwe. There has been speculation about the South African musician relocating to Harare where he is involved in...
Share via
x
More Information
x