Yasir Shah revelled in his matchwinning 6 for 26 in the opening one-day international against Zimbabwe, crediting a helpful pitch, his control and the Zimbabweans’ inability to read his variations for his success.

“When I was coming here today from the hotel, my plan was very simple: just to bowl wicket-to-wicket and control my line and length, because this was my first game on this tour,” Yasir said. “That worked for me. The first thing was for me to control my line and length. In between that, there are varieties. I think the Zimbabwean batsmen weren’t able to read my variations when I was bowling googlies or flippers or legbreaks, and that was troubling them a lot.”

Yasir’s figures were the second best by a Pakistan spinner in ODIs, and the best ever by a spinner in Zimbabwe, but he humbly suggested that there were greater heights to be scaled and that there would always be room for improvement.

“First of all thanks to almighty Allah for this performance, but obviously there is always room for improvement,” Yasir said. “I just try my level best whenever I play. It doesn’t matter what the result is in the end, good or bad, I’ll keep making the effort because when I started playing cricket I never thought that this was going to happen. I’ll definitely keep trying to be better. If things come my way I’m grateful to Allah and I’ll always keep trying hard.”

Yasir has some experience of touring Zimbabwe, having been part of the 2011 tour here. His first international wickets were Vusi Sibanda and Tatenda Taibu in the third ODI of that series, which also marked his international debut, but he bowled four wicketless – and expensive – overs in the T20Is that followed. Yasir admitted that he was already finding the spin-friendly conditions on this trip much more to his liking.

“Four years ago when I played over here, the conditions were very different,” he said. “The pitches favoured the batsmen more. But now I feel that there’s much more assistance for the bowlers. The ball is spinning and it doesn’t come onto the bat as comfortably as it did before. So conditions have definitely changed a little bit.”

Opening batsman Brian Chari debuted for Zimbabwe in this match, and though he survived a fearsome opening spell from Mohammad Irfan he lasted just two deliveries against Yasir. “It was really skidding through,” Chari said. “He’s quick through his action and it’s actually a bit difficult to read his fingers when he’s bowling with that quick arm action.

“I don’t think sweeping would be a good option to Yasir Shah,” he added. “If we can use our feet a little bit better to get to the pitch and cover the spin, I think we can work him out. We should use our feet a bit more, rather than going back and staying in the crease to the spinners.”

But Yasir said that even if the Zimbabweans do use their feet more to him in the remaining games, his awareness and variations will still give him an advantage. “If someone comes down the track at me and uses their feet, I have another plan to respond to them. I’m used to it as a spinner. The Zimbabweans were under a lot of pressure, and whenever they did try to use their feet I always had something to counter that.” 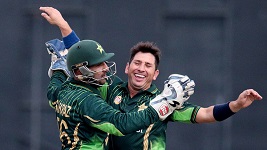 Zimbabwe not able to read me – Yasir

ZIMBABWE - Yasir Shah flummoxed Zimbabwe's middle order with his variations © AFP Yasir Shah revelled in his matchwinning 6 for 26 in the opening one-day international against Zimbabwe, crediting a helpful pitch, his control and the Zimbabweans' inabil...
Share via
x
More Information
x