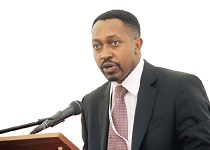 ZIMBABWE – Zimbabwe is not in a liquidity crisis and the economic challenges are a result of consumption choices of its citizens who are gobbling $7 billion on imports annually, Confederation of Zimbabwe Industries chairperson Mr Busisa Moyo has said. Addressing delegates at the Local Economic Development Forum underway at the Zimbabwe International Trade Fair here, Mr Moyo said it was not fair to blame Government on the challenges being faced by the country as every citizen had a role to play in addressing the situation.

“Annually, Zimbabwe imports amount to $7 billion and the figure is not changing. We do not have a liquidity problem, but consumption choice.

“We must also gear our policies towards industrialisation. We find a lot of counter-productive policies. Policies must match our strategy,” he said. He said the country might have sound policies, but bad practices such as corruption were ruining the country’s economy.

Mr Moyo said the country’s neighbours were busy planning on how to increase exports to Zimbabwe, imploring companies to address the issue of pricing that he said was promoting imports.

“There are some things, which are being sold for $30, which should cost $3. Zim-Asset aims to create 2,2 million jobs by 2018 that is not a problem it just depends on the price of labour.

“A company from India wanted to set up a call centre in the country, but the minimum wage in the telecommunications sector were prohibitive,” he said. Former Civil Aviation Authority of Zimbabwe board chairman and entrepreneur, Dr Temba Nyoni, called on local authorities to reform their by-laws so that they were in tandem with international trends.

“In China plans are approved within a day, but in Zimbabwe it takes months. Internationally banks open and shops operate 24 hours, but here some days they close at 12 (noon).

“We need to have a culture shift if we are to attract Foreign Direct Investments. It is our mentality which is hindering development.”

Event spokesperson, Mr Ntokozo Msipa, said he was impressed by the attendance and was expecting the Chinese delegation to arrive today.

“So far 350 delegates and over 30 exhibitors are here for the forum. We are happy with the attendance and we are expecting more guests tomorrow (Wednesday), which is the official opening to be presided over by Local Government, Public Works and National Housing Minister Saviour Kasukuwere.’’

ZIMBABWE - Zimbabwe is not in a liquidity crisis and the economic challenges are a result of consumption choices of its citizens who are gobbling $7 billion on imports annually, Confederation of Zimbabwe Industries chairperson Mr Busisa Moyo has said. Add...
Share via
x
More Information