ZIMBABWE – Secret high-level talks between opposition parties on forming a grand coalition to challenge President Robert Mugabe’s Zanu-PF party at the next general election are reportedly taking place in Zimbabwe.

According to local newspapers, the opposition groups involved have appointed former finance minister Tendai Biti, who recently established the People’s Democratic Party, to lead negotiations with former vice-president Joice Mujuru’s and her supporters.

Ms Mujuru was Mr Mugabe’s most trusted lieutenant until she and her supporters were expelled from the ruling party in late 2014 and early 2015 for allegedly plotting to oust the 91-year-old as leader.

Since then she is said to have aligned with a new movement called People First, which comprises many of her former allies in Zanu-PF.

Mr Mugabe instigated the internal party purge in a bid to end the factionalism eating away at the movement he has led since the 1970s. However, his tactic has only created a vacuum within Zanu-PF’s leadership that has created more instability, as other party members ambitious for higher office fight to fill the void left by the mass expulsions.

Opposition parties are said to believe the 2018 election may be the best chance in decades they have to oust the ruling party from power, because of its internal divisions and poor performance in government since winning the last election in 2013.

Zimbabwe’s main opposition party, Morgan Tsvangirai’s Movement for Democratic Change, has excluded itself from participating in a coalition involving Mujuru thus far, saying People First did not have the necessary political structures to succeed.

But some analysts believe Tsvangirai may in reality be more concerned with losing supporters to Mujuru’s new movement, which recently toured the country’s 10 provinces to try and increase its support base.

Initial meetings between Mr Biti, Ms Mujuru and other leaders have taken place to try to find common ground.

The Zimbabwe Independent has reported that opposition parties are not yet convinced Ms Mujuru has what it takes to cross over into opposition politics, given her close association with Mr Mugabe, which goes back to the war of independence in the 1970s.

Meanwhile, amid a deepening drought that is leaving millions of Zimbabweans reliant on food aid, the government has announced a select group of white commercial farmers have been issued with new leases to help redevelop the country’s crippled economy.

The state-run Herald newspaper this week quoted land and rural resettlement minister Douglas Mombeshora as saying the white farmers receiving leases were recommended by their respective provincial leadership, because of their “strategic importance”.

“I cannot tell the number of leases we have given out or that we are going to give out, but all I can say is we are giving white farmers leases,” Mr Mombeshora said.

Since 2000 the vast majority of Zimbabwe’s 4,000 white commercial farmers have been kicked off their land as part of the government’s land reform programme. The programme was one of the catalysts that led to the collapse of Zimbabwe’s economy, say experts. 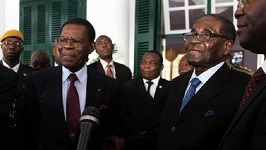 ZIMBABWE - Secret high-level talks between opposition parties on forming a grand coalition to challenge President Robert Mugabe’s Zanu-PF party at the next general election are reportedly taking place in Zimbabwe. According to local newspapers, the oppos...
Share via
x
More Information
x