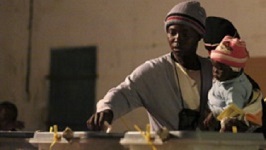 ZIMBABWE – Some Zimbabweans have commended the Zimbabwe Electoral Commission for exploring ways of using the biometric voting system, saying this will minimize electoral fraud.

But others, like the leader of the Renewal Democrats of Zimbabwe, Elton Mangoma, say this system won’t work in Zimbabwe.

Mangoma believes that it is a futile exercise to introduce this system without eliminating the fear factor among voters and making a wholesome reform of the Zimbabwe Electoral Commission said to be controlled by members of the country’s spy network, the Central Intelligence Organization, and other security agents.

“We as RDZ are very much against its introduction, particularly at this time and we urge other political parties and civil society to think long and hard before they endorse it,” he says.

He claims that duplicate voting is not the major issue in the Zimbabwean electoral system, which is what BVS seeks to address.

“Although duplicate voting takes place, it is by far not the main methods used by Zanu PF and ZEC to rig the election. The main method used remains the people in the Zimbabwe Electoral Commission and the electoral system they use. BVR is a computer software system and there are a number of these systems on the market. It is still a relatively new system and not yet perfect.

He further claims that this system is likely to be abused by the ruling party, which has over the years been accused of being aided by the Registrar General’s Office and ZEC to allegedly rig elections.

“This will be giving Zanu PF and ZEC a free hand to rig with the permission of the political parties. Colleagues, you cannot control what you do not know.  Zanu PF and ZEC control the passwords … These are the very people whom the Zimbabwean people do not trust. They can alter the data at any time. Remember whoever has the authority to add a voter’s data, can change or delete it and none of us can ever detect it.”

His fears are echoed by Harare resident, Reason Chanaiwa, who argues that current power outages in Zimbabwe can hamper a biometric voter registration and voting system.

“I think biometric voter registration is a noble idea considering what happened in 2013 when there were allegations of Nikuv but the downside to it is that of the electricity challenges and without solutions in sight we cannot implement it in 2018 because we have no electricity in rural areas and where the rural electrification has taken place people are experiencing a lot of power shortages. I do not know how they are going to do it but for me it is a non-starter.”

But Rindai Chipfunde Vava of the Zimbabwe Election Support Center says while the biometric voting system has its own shortfalls it is far much better than the current system, which she claims has disenfranchised a lot of voters.

“If you remember in the 2013 elections the most problem was the issue of issuing voting slips and the use of multiple voters was alleged to have taken place. People have left for the Diaspora and people have died so if you call afresh a voters roll it means everyone will come afresh then we are guaranteed that it will be a fresh voter’s roll and it is not easy to duplicate names. In any system whether manual or not there will be irregularities.

“We talk of human errors not machine errors. However it is an opportunity to move to something that is much higher where it is done for the integrity of the electoral process so why not take this opportunity.”

Chipfunde Vava adds that the biometric voting system won’t be the only way of addressing Zimbabwe’s electoral problems as there is need to have complementary reforms for Harare to have free and fair polls.

“It is not a panacea to all our electoral problems. Let us not only focus on voter registration. We need to focus at other range of legislative and administrative processes for example the issue of political violence. People may be prevented to go and register or even vote on election day. We need to address all these issues including result management. We are one step in the right direction but more steps are needed for free and fair elections.”

Abraham Isaacs, who has been observing elections in the region for a long time, concurs, noting that the advantages of the biometric voting system outweigh its shortcomings and Zimbabwe is on the right track.

“This is the only way to go for Zimbabwe it has been overdue a number of African countries are now using it. It safeguards the vote later on during the voting process. Biometric voter registration will ensure that the issue of duplication and using slips will go away. This is a good move.”

“Biometric voter registration is a process whereby a person’s physical appearances are used to register voters. It is a secure way to register voters and it makes it easy to identify people. It makes use of a number of things to verify like fingerprints or facial features which are quite unique to each voter apart from name and I.D number.

“This biometric voter registration is quite an expensive technology to implement, however, it is very fast and efficient and there are issues of integrity and reliability of information. For example one cannot fake their finger prints.”

Chibhoromani, however, doubts the likelihood of Zimbabwe implementing the system.

“The disadvantage is that it needs dedicated machinery like finger prints scanners and facial cameras to recognize faces and at the moment considering our economic situation where government is failing to pay civil servants I do not think they will be prepared to roll out this program because it is expensive.”

The lack of an efficient, trusted and credible voter registration system has compromised Zimbabwe’s electoral processes, a situation that contributed to the West’s decision to impose targeted sanctions on President Robert Mugabe and his inner circle.

African nations using the biometric voter system include Kenya, Namibia and other nations.