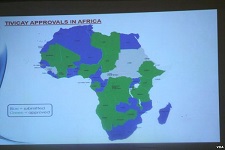 ZIMBABWE – Zimbabwean parents and guardians have been reminded of the importance of having quality time and discussions on reproductive health with their children as a way of curbing the spread of sexually-transmitted diseases such as HIV, which causes AIDS.

Speaking on the sidelines of the just-ended International Conference on STIs and HIV in Africa, Health Minister Dr. David Parirenyatwa, said parents should openly discuss reproductive health issues with their children so that they are more enlightened on HIV and AIDS.

Dr. Parirenyatwa said concerted efforts in fighting the spread of HIV are vital in light of the fact that HIV infections among adolescents in Zimbabwe are the highest of all the age groups, particularly between the ages of 15 and 24.

“It’s so important that you do not leave adolescents on their own. And sometimes parents are scared of their children, they don’t want to give them guidance, they think they are inferior to their children. Now the world is changing, there is so much internet working and the children may be advised on what they know but still parents must get involved because they are genuine guardians of their own children.”

Twenty-eight year-old Gugulethu Nyazema, who is doing a business course at a local university, echoed Dr. Parirenyatwa’s sentiments that adolescents, especially the girl-child, are the most vulnerable age group.

Nyazema said, “We are trying to look for ways to survive. It’s mainly to do with the fact that your parents cannot afford to take care of you. They can only take you to school and pay school fees. Some go to school with fees not being paid because they know the situation at home.

“So they will find an older guy or richer who can substitute that. But unfortunately such substitution comes with its own repercussions.”

Forty-three year-old Melania Chiledi, a mother of three who stays in Harare’s Sunningdale suburb, said adolescents are a very difficult age group to deal with, and parents should be compassionate when they discuss reproductive health issues with them.

“So even if you try to tell them that these things are not good they won’t understand you because they get emotional when you speak about it. I remember I spoke to this other lady, she was under age and I saw her do such things. I confronted her and she said she had no parents and I have decided to do this so that I earn money to make a living,” said Chiledi.

She said parents should reclaim their rightful place and discuss STIs and HIV issues with their children at tertiary institutions instead of living the responsibility to authorities at universities and polytechnics.

She also noted that dialogue in families is an expression of love and parents who give up on their children are condemning them to a slow death sentence.

Chiledi said, “Children these days are full of ‘I know’ and they don’t want to understand and they want to experience (things), but once they get infected that’s when they realize these things are wrong.”

World Health Organisation Director in the department of HIV/AIDS, Dr. Gottfriend Hirnschall, told Studio 7 that adolescents need to be empowered through deriving better knowledge of how to deal with HIV.

He said, “The number of adolescents who have actually been dying of AIDS has also increased. We have to put more effort in better understanding what some of the reasons are, but also making available the tools, the services available for young people that respond to their needs.”

Dr. Hirnschall said a decision should be made on the provision of condoms in schools.

“So yes, there is an issue about distributing condoms in schools but obviously when young people do not have access to condoms we are putting them at risk and they become infected.”

A local doctor, Tatenda Chigonda, said the entry of the HIV drug, Tivikay, on the Zimbabwean market offers hope for adolescents. Dr. Chigonda said they should be encouraged to be tested and to go on treatment.

He said Tivikay is definitely a breakthrough for those living with HIV.

“It has less potential for reactions with other medications. We can use it for instance with people with TB. Previously we were only able to use Faverent which would have problems with certain population groups. For those who can’t use Faverent are still able to use this new drug.

Dr. Parirenyatwa said through the Global Fund government will be able to mobilise resources to treat people who are identified early as being HIV positive early.

He noted that parents should encourage their children to go regularly for testing.

“What I am happy about is that there are now new WHO guidelines which say test and treat. If you are tested no matter whether you are an adolescent or an infant, or you are an eight year-old, as long as you are tested and found to be HIV positive the new guidelines say, treat so we don’t wait for the CD4 counts anymore.

“We estimate that in this country there one comma five people who need treatment, because a lot of people are living with HIV and have not been tested.”

Some parents in Zimbabwe normally don’t discuss reproductive health with their children as this was usually done by close relatives, especially aunties and uncles.