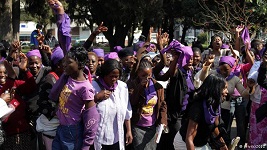 At least 15 female and six male students were arrested in the Zimbabwean capital of Harare on Friday during a protest against poor living conditions in colleges and universities in the country.

Police used indiscriminate force against scores of students and members of the public who had gathered at the Africa Unity Square opposite the parliament building.

“We wanted to petition the parliament and government over the high tuition fees of $1,000 per semester, the general bad state of the education system, lack of accommodation and sexual harassment of female students by lecturers. We are calling upon the Higher Education Minister Prof. Jonathan Moyo to resign because he is not paying attention to grievances and [is instead] enmeshed in the succession battle in the ruling ZANU PF [The Zimbabwe African National Union Patriotic Front]” Mutubuki said.

The arrest of Zimbabwean students Friday is not the first; however, the assault and detention of female students was brutal, Mutubuki explained.

ZimRights, a nongovernmental organization fighting for basic human rights in the country, condemned the police action in a statement.

ZIMBABWE - Police have used indiscriminate force against scores of students during a protest against poor living conditions in colleges and universities in Zimbabwe At least 15 female and six male students were arrested in the Zimbabwean capital of Harare ...
Share via
x
More Information