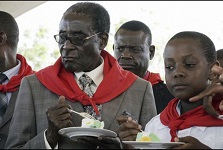 ZIMBABWE – Calling Robert Mugabe “dear father,” ”his royal highness,” and “the Moses of Africa” members of Zimbabwe’s ruling party reasserted their loyalty to the longtime leader at the celebration of his recent 92nd birthday.

By bus, truck and on foot, thousands of Zimbabweans wearing the colors of the ruling ZANU-PF party made their way to the normally sleepy southeastern city of Masvingo to mark Mugabe’s birthday.

Mugabe, who has ruled since 1980, let 92 balloons into the air to start the festivities held at the historical Great Zimbabwe monument, about 15 miles from downtown Masvingo. During the televised event, school children performed military drills and recited poetry praising Mugabe and criticizing western nations.

Speaking for more than an hour, Mugabe criticized the political jockeying in his party, saying younger members who have spoken out against his wife Grace’s growing power must be disciplined.

“It is shameful the way Mrs. Mugabe is being criticized,” he said, accusing them of leaking scandals to the press. “Who may be the enemy among us?”

Many supporters wore outfits emblazoned with Mugabe’s portrait and feasted on beef and game meat. Political allies from the ruling parties of neighboring countries took turns to congratulate Mugabe, who led the guerrilla war in the 1970s when this country was white-minority-ruled Rhodesia.

The event, dubbed the 21st February Movement after Mugabe’s actual birthday, has been held since 1986. The Zimbabwean president marked his birthday earlier this week in smaller celebrations that included blowing out candles on a multi-tiered cake with gold frosting surrounded by his family and a gala dinner attended the country’s elite.

The opposition has criticized the celebrations as insensitive to the many Zimbabweans facing hunger due to drought and a struggling economy. Masvingo province is one of the areas worst hit by a drought that has been declared a disaster.

ZIMBABWE - Calling Robert Mugabe 'dear father,' ''his royal highness,' and 'the Moses of Africa' members of Zimbabwe's ruling party reasserted their loyalty to the longtime leader at the celebration of his recent 92nd birthday. By bus, truck and o...
Share via
x
More Information