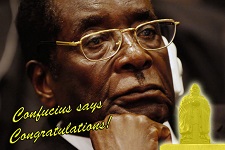 ZIMBABWE – It’s that time of year again. The time when the world waits with bated breath to see who was voted as Earth’s greatest contributor to peace and receives what may be the highest honor a human can receive. I’m talking, of course, about the Confucius Peace Prize.

The Confucius Peace Prize is an annual award given to those who work towards peace as seen “from an Eastern perspective”, with past laureates including Vladimir Putin and Fidel Castro. This year, the selection committee announced that the Confucius Peace Prize will go to none other than Zimbabwe President, Chairperson of the African Union, and one of Forbes’ “10 Worst Dictators” in the world: Robert Mugabe.

First, a little background on the award. The Confucius Peace Prize was abruptly established in 2010 right around the same time Liu Xiaobo was announced as winning the Nobel Peace Prize and was awarded the day before his. It was given to former Taiwanese Premier and Vice President Lien Chan for his efforts towards positive relations with mainland China. Lien was unable to accept the award in person, however, because no one told him about it.

The intent of the Confucius Peace Prize was to provide another “Confucianism” viewpoint on contributions to world peace. For example, Putin was given the peace award the following year for his decision to go to war in Chechnya in 1999.

“His iron hand and toughness revealed in this war impressed the Russians a lot, and he was regarded to be capable of bringing safety and stability to Russia.”
[Qioa Damo, China International Peace Studies Center]

Like Lien, Putin did not attend the awards ceremony, and a young student who was born in the former Soviet republic of Belarus inexplicably accepted the award instead. And thus a tradition of overseas recipients not attending the ceremony had begun.

Actually the voting by the 76-person committee was diverse, with no clear majority chosen, so a jury decided to award both Mugabe and Murayama with the prize. Murayama was forced to bow out, however, as he couldn’t attend the ceremony due to health concerns. The 91-year-old former PM had this to say about the award.

“My body is weak, so I said I could not go to China and refused the award. It would have been nice to receive an award from a famous person such as Confucius. I don’t really know if I deserve it though. I’m puzzled why I was chosen.”
[Tomiichi Murayama]

Robert Mugabe was said to have been chosen for “serving as the Zimbabwe President from the 1980s. Overcoming a number of difficulties. Contributing to building the government, economy, and order in the country. While continuing to work at the age of 91 actively for African peace.”

Indeed, Mugabe succeeded in engineering his virtual one-party government in part by establishing the Fifth Brigade: a unit of soldiers specially trained by North Korea with the sole purpose of dealing with domestic “enemies.” This military group is believed to have slaughtered anywhere from 10,000 to 30,000 Zimbabweans in the 80s.

Mugabe’s handling of the Zimbabwean economy also gave economists of the world actual empirical evidence of what happens when a country completely runs its currency into the ground. Under Mugabe’s leadership the nation experienced hyperinflation up to 79.6 billion percent per month by the time the Zimbabwean dollar was discontinued.

As for maintaining order, Mugabe has been hugely successful at keeping the deadly LGBT community at bay. In fact, he even saw his predecessor, former Zimbabwean President Canaan Banana, convicted on 11 counts of sodomy.

It is uncertain whether Mugabe will accept the award which consists of a gold Confucius trophy and 100,000 yuan in prize money, which equates to US$16,000 or 42 trillion Zimbabwean dollars in 2008. Regardless, with such a track record I think we can all see why this man was chosen to receive the Confucius Peace Prize, right?

To be fair, despite the past atrocities and mismanagement of the Zimbabwean government in the past, the country has made a significant turn-around in recent years while still under the leadership of Mugabe. Their economy has stabilized somewhat and living conditions have been improving.

This is largely thanks to substantial investments by China who are also cooperating with widespread infrastructure development around Zimbabwe. That has led some to suspect that the Confucius Peace Prize being given to Mugabe was actually China indirectly giving itself a pat on the back.

And those were the relatively kind criticisms. Here’s what others had to say about the award both inside and outside of China.

“Is this a joke news story?”
“Do they even know what peace is?”
“Seriously?! lol Maybe someone just renamed the Ig Nobel Prize.”
“It sullies the name of Confucius.”
“Farce.”
“More like the ‘Confucius Disturbing the Peace Prize.’”

It has got to be tough getting a major international award up and running, so a few snags along would be expected for the Confucius Peace Prize. If they keep plugging away at it, who knows? It might just get recognition some day.

For now we’ll just have to stick with the Nobel Peace Prize: you know, the one that was given to Henry Kissinger who bombed a country he wasn’t at war with, Cordell Hull who helped send a boat full of Jewish refugees right back to Nazi Germany, and the guy who invented the prefrontal lobotomy.

ZIMBABWE - It’s that time of year again. The time when the world waits with bated breath to see who was voted as Earth’s greatest contributor to peace and receives what may be the highest honor a human can receive. I’m talking, of course, about the C...
Share via
x
More Information