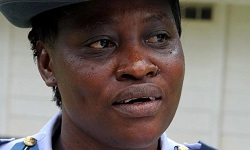 ZIMABWE – A woman has broken through the glass ceiling of a high-flying profession in Zimbabwe: the air force.

Ellen Chiweshe, whose title was group captain, has been promoted to become the country’s first female air commodore, the No 3 post in the air force.

The state-run Herald newspaper reported Chiweshe’s new rank in Tuesday’s edition, which included a photograph of air force commander Perrance Shiri fitting a hat on her head as part of a promotion ceremony.

The newspaper quoted Chiweshe as saying: “It was a man’s world and it was difficult to break in.”

Chiweshe, one of the first female officers to work in the finance department of the air force, was promoted “not because of bias or favour but because of her competency”, the Herald quoted Shiri as saying.

“The sky is the limit. There is nothing that can stop women from attaining high posts,” he said. Zimbabwe’s army has a female brigadier, according to Shiri.

Previously, one of the most prominent women in Zimbabwe was Joice Mujuru. Once known as “Spill Blood”, Mujuru was a female rebel commander during the war against white Rhodesian rule that led to Zimbabwe’s independence in 1980.

She was a cabinet minister and rose to the post of vice-president, but was fired by President Robert Mugabe in 2014 amid accusations that she was trying to topple him. Mujuru denied the allegations.

MDC Formations No Longer A Threat To ZANU PF