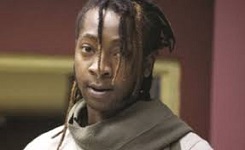 Roki, as he is affectionately known in showbiz, will be an in house artist for the Borrowdale-based studio, which has been doing productions for Winky D, Killer T and Freeman, among others.

The Chidzoka singer said he has since closed his own studio as he concentrates on his new album that is expected before Christmas.

“Yes, I am now signed with Kenako Studios. This gives me room to be creative as a musician as I will be concentrating on singing while someone will be producing my work. I am working on an album that will be released before Christmas,” he said.

The former Big Brother Africa housemate also disputed claims that he sold studio equipment that was donated to him by First Lady Grace Mugabe.

“It was all rumour started by my competitors. I just decided to close the studio but the equipment is still there gathering dust. I never sold even a computer mouse,” he said.

Kenako Media public relations manager, Samantha Thodlana said the company decided to sign Roki because of his vast talent and experience in the music industry.

“Roki is one of the talented stars in Zimbabwe and as a fledging studio, we decided to sign him on a permant basis. He will be our resident artist,” she said.

Kenako Muzik is a music and sound recording studio located in the northern suburb of Harare.

Its main thrust is to cultivate talent, produce quality music and to aggressively promote the essence of music as a major tool that enhances entertainment value for the consumers.

The recording studio consists of a live instrument area, sound engineer’s area with state-of-the-art equipment and booth. It is the only full-service, professional recording studio in the area.

ZIMBABWE - Nomadic but talented singer Rokiford Josphats has signed with Kenako Studio. Roki, as he is affectionately known in showbiz, will be an in house artist for the Borrowdale-based studio, which has been doing productions for Winky D, Killer T and F...
Share via
x
More Information