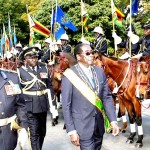 ZIMBABWE – Prsident Robert Mugabe’s Zanu PF party is reportedly in secret talks with the opposition MDC-T and MDC, as the parties seek to save the southern African country’s struggling economy.

Reliable sources told the independent publication NewsDay that the talks were two-pronged. One of the objectives was for opposition parties to assist the  Zanu PF government turn around the economy, including by bringing external support onside.

The other is aimed at disrupting any coalition plans between former Vice-President Joice Mujuru’s new People First outfit and the MDC-T, the weakened party of former prime minister Morgan Tsvangirai.

Others claim the talks are modelled along discussions that preceded the Government of National Unity (GNU) which saw Mugabe and Tsvangirai share power following a disputed election.

Diplomatic sources claimed the parties met in Kenya and Ghana over the past few months, with a decisive meeting set to be held in Victoria Falls on the border between Zambia and Zimbabwe between September 24 and 27.

Zanu PF was, according to our sources, represented by July Moyo and Oppah Muchinguri-Kashiri. The latter was
instrumental in elevating First Lady Grace Mugabe into the ruling party’s powerful politburo.

Tsvangirai’s MDC-T was said to be represented by Douglas Mwonzora and Lynette Karenyi, while Moses Mzila Ndlovu and Mirriam Mushayi represented the Welshman Ncube-led MDC.

“We have had meetings in Kenya and Ghana, but these are preliminary. These forums set up informal meetings that are supported by the Zimbabwe Institute (ZI) to facilitate continuous dialogue between political parties, said a source privy to the goings on.

“Zanu PF representatives Moyo and Muchinguri-Kashiri indicated at a meeting in Accra, Ghana, that the ruling party wanted opposition assistance to turn around the economy. It was a clear proposal for some sort of GNU, but the opposition demanded a return to legitimacy.”

“I have not been briefed on anything related to that. I have no idea of any talks or engagement,” he said.

But former Information minister Jonathan Moyo, who now holds the Higher Education docket,in reaction said that such talks were only meant to topple Mugabe.

“Successionists using the cover of interparty talks to stampede President Mugabe out of his electoral mandate are playing with fire!”’ Moyo said on his Twitter account, on which he is very active.

The Institute was only looking to “fool gullible donors” into supporting another deal, Moyo said, as the ruling party had more than a two-thirds majority in parliament.

‘Absolutely nothing’
ZI was formed during the inclusive government and its secretariat handled the administration of the Joint Monitoring and Operations Committee (Jomic) at the height of the political feuding in Zimbabwe.

Norwegian envoy to Harare Bard Hopland, whose country is said to be facilitating the talks, denied his country was funding any discussions. “I have heard absolutely nothing related to discussion and are not aware of any such engagements,” Hopland said.

NewsDay could not get hold of ZI officials at the weekend, but informed sources claimed the organisation was co-ordinating the meetings.

“It is a delicate thing and the best would be for you not to write the story. It is unfortunate that at a time when some Zimbabweans are trying hard to find solutions others want political mileage out of this at the same time wrecking the future of the country,” this
paper was told on making further enquiries.

A senior MDC-T member, who declined to be named, was not impressed.

“Why do you want to write that story? You are likely to jeopardise the discussions. It would be proper if you wait for the Victoria Falls meeting. That is the main one and then you can write.

“If you love this country you would not write such stories. Some of us are working very hard to try and alleviate the people’s suffering and we do not need the media to throw spanners in the works,” the national executive member said.

Mwonzora, said to have represented Tsvangirai’s wing, denied any knowledge of the “talks or meetings”.

“As the MDC we have been very clear that we will not be drawn into a coalition to save Zanu PF. I have no idea of any talks or meetings that you refer to,” he said.

Confirmed meetings
However, party spokesperson Obert Gutu confirmed there had been meetings, but only to do with issues of mutual interest.

“If you say talks it gives the wrong impression. There have been engagements and these have been continuous since the GNU on areas that the parties represented in parliament agree,” he said.

“I am not sure of any talks unless these are between Zanu PF and the MDC-T. In the tripartite engagements, we have been involved in, the discussions to do with things like the implementation of the Constitution and such areas as the parties have mutual interest and agree on,” said Ncube.

Moyo’s mobile was unreachable, while Muchinguri-Kashiri was said to be continuously in meetings.

Let slip
Speculation is rife after, a State media columnist going by the pseudonym Nathaniel Manheru and believed to be  Mugabe’s spokesperson George Charamba, seemed to let slip that there were discussions.

In his column of September 12, which tried to unpack former Mujuru’s political return following the publication of her manifesto, Manheru said there are discussions going on.

“As Mujuru was launching herself, many things were happening between Zimbabwe and her Western adversaries. Significant
conduct with Nordic countries was taking place,” he wrote, adding there were also positive meetings going on with the European Union as well as the International Monetary Fund regarding Zimbabwe’s quest to re-invent itself.

There has been deep speculation that Mugabe, the only leader Zimbabweans have known, will quit from next year or be handed a reduced role. A major behind-the-scenes succession positioning between rival factions is seen to be underway.

On Saturday, Mugabe, 91, delivered one of his shortest speeches yet at the burial of national hero Sikhanyiso Ndlovu and at which he arrived supported by his wife. Last week, he read a speech that he had delivered weeks earlier. Parliament was the next day summoned back, where the right text was adopted.