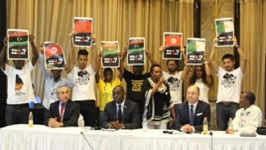 Among the guidelines that Zimbabwe has to meet is putting all those who are HIV positive on antiretroviral therapy, availing anti-retroviral drugs to even those that are not infected, targeting people that are at substantial risk as a preventive measure and ensuring the provision of post-exposure prophylaxis (PEP).

Speaking to journalists, HIV/AIDS and TB Unit director in the Ministry of Health and Child Care, Dr. Owen Mugurungi, told journalists that Zimbabwe had to follow the test and treat method despite requiring huge resources.

“It is now official that WHO recommends countries to strongly look at the issues of test and treat. Previously we were treating depending on how damaged the immune system has been. Evidence however has shown that it is of benefit that we start treatment early. People will have less illnesses and people will not die.”

Mugurungi, however, admitted that with the ailing economy, Zimbabwe will have to prioritise in the provision of the life-saving drugs.

“We have 1.2 million people in need of ART at the 500 CD4 count. We are at 850,000 and we still have another 350,000 in need but now we are saying we need to test and treat. How do we deal with it? Everyone with HIV needs treatment but others need it more. Urgently we need to make sure that there is a movement and people are getting tested.”

Executive director for Zimbabwe National Network of People Living with HIV/AIDS, Muchanyara Mukamuri, told Studio 7 that while they applaud the new guidelines, they question how the broke government of Zimbabwe will implement them.

“We need to increase local health financing, fifteen percent of the budget according to the Abuja Declaration. This has been a song, it hits the wall and comes back to us with no positive reactions because the economy is not doing well or for whatever reason. That shouldn’t be our problem but we are saying let us improve on the domestic financing. At least show some seriousness and commitment to what we have signed. We also need to increase transparency in the distribution and procurement of drugs.”

Mugurungi said the ministry would also be relooking at the testing procedures to move from only waiting for people to come at centres for testing.

He said the ministry will ensure that the testing methods are changed to allow nurses to go and test clients in the communities.