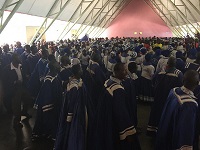 ZIMBABWE – Human Rights Watch also documented discriminatory social norms that link a girl’s perceived sexual “purity” to her family’s honor. If a girl becomes pregnant, spends the night outside the family home, is seen with a boyfriend, or returns home late after seeing a boyfriend, her family may force her to marry for the sake of honor. In some cases girls who become pregnant or are sexually active decide to enter a customary marriage because they fear being rejected, beaten, or abused by relatives.

In most cases of child marriage Human Rights Watch documented, girls had no sex education before they became pregnant or married. The Health and Child Welfare Ministry found in a 2010 survey that young people, especially those ages 10 to 14, lacked basic knowledge of reproductive health. The government’s national school curriculum does not include a comprehensive sex education program. Many Zimbabweans fear that providing young people with contraception contributes to promiscuity. Many indigenous apostolic churches actively discourage use of contraception.

The negative health consequences of adolescents’ limited access to reproductive health information and services can be life-threatening. Early childbearing contributes to maternal mortality, and is a leading cause of death among girls ages 15 to 19 globally. Although the overall HIV infection rate has dropped in Zimbabwe, it remains high, at 15 percent, and Zimbabwe has the sixth-highest number of annual adolescent AIDS-related deaths in the world. According to UNAIDS, HIV prevalence is almost twice as high among women and girls ages 15 to 24 as among men and boys of the same age.

“Zimbabwe’s government and religious leaders should recognize that comprehensive sex education and access to contraception are essential to preventing child marriage and protecting girls from HIV transmission and early childbearing,” Mavhinga said. “Early childbearing can lead to death or serious injury, including obstetric fistula.”

Some child brides Human Rights Watch interviewed had experienced violence such as beatings or verbal abuse from their in-laws or other relatives. Nearly all the child brides said their husbands had abandoned them, leaving them to care for children without financial support. Many described mental distress and suicidal feelings as a result of their situation.

Education can help protect against child marriage, but many girls said they dropped out of school because their families could not afford school costs. Nearly all the child brides Human Rights Watch interviewed were not able to continue their education after marriage, either because of their financial situation, their husband would not permit it, or they had to care for a baby. Many indigenous apostolic churches forbid girls to continue education after marriage. One church elder in the Johwane Marange apostolic church in Masvingo said: “Formal education is not important because the church will teach her the necessary skills to work with her hands and provide for her family. Skills like weaving baskets and mats to sell.”

In October 2014, two former child brides asked the Constitutional Court to have child marriage be made a criminal offense and declared unconstitutional. They asked the court to declare 18 the minimum age for marriage and to have all marriage laws amended. The government opposed the claim on the grounds that the applicants had not been forced into child marriage, but had “simply opted to live in unregistered unions when they were minors”; and since the Marriages Act permits girls to marry at 16 and boys at 18, “the differentiation arises from biological and psychological maturity levels for boys and girls.”

In July, Zimbabwe became the eighth country to join the African Union campaign to end child marriage in Africa. In her keynote address, Zimbabwe’s first lady, Grace Mugabe, called on the Justice Ministry to revise Zimbabwe’s laws to set the minimum marriage age at 18, but her recommendation has not been carried out.

The government has yet to finalize and implement a national action plan on ending child marriage, as the African Union has requested. The action plan should set out the government’s strategies, in partnership with key stakeholders – donors, community leaders, adolescents, and nongovernmental groups – to address child marriage in Zimbabwe.

“President Mugabe and his government should not ignore the suffering of hundreds of thousands of girls in Zimbabwe who are robbed of their futures through early marriage,” Mavhinga said. “The government should drop its objection to the constitutional challenge, reform its laws, and ensure that the minimum age of 18 for marriage is applied across the country, including by religious denominations.”

For further details, recommendations, and accounts by child brides, please see below.

Child Marriage in Zimbabwe
Africa has 15 of the 20 countries in the world with the highest rates of child marriage. According to UNICEF, if the current trend continues, the number of child brides in Africa is expected to double by 2050.

Zimbabwe’s National Statistics Agency in 2014 published the results of a survey called the Zimbabwe Multiple Indicator Cluster Survey, which found that 32.9 percent of women between 20 and 49 married before age 18. There has been no comprehensive national study, either by the Zimbabwean government or independent organizations, of the number of girls who drop out of school due to child marriage or of the other harmful effects they suffer.

The government has not produced an action plan to create and strengthen community-based child protection mechanisms with a particular focus on child marriage, including shelter facilities or other mechanism to support girls turned away by their husbands or their families. Local organizations such as the Musasa Project – a nongovernmental group working to protect girls’ and women’s rights – provide shelter for abused girls, but their facilities are not available countrywide.

According to Real Open Opportunities for Transformation Support (ROOTS), a nongovernmental organization campaigning to end child marriage in Zimbabwe, child marriage is most prevalent in poor traditional farming communities and in areas where illegal gold panning is the main source of income. Illegal gold panners have easy access to cash when they sell gold which enables them to lure vulnerable girls living in poverty.

Gaps in Zimbabwe’s child protection system result in lack of protection for victims of child marriage and significant obstacles to girls seeking redress. For example, girls have limited information about their rights, often do not have the money to travel to where they can seek protection from the authorities, and when they do, the authorities often dismiss their concerns as “a family matter.”

Contradictory Laws
Zimbabwe has conflicting legal provisions on the minimum age for marriage. Zimbabwe’s constitution does not expressly prohibit child marriage, and a number of laws effectively condone it.

Section 78 of the constitution says that anyone who has attained the age of 18 has the right to found a family and that no one should be compelled to marry against their will. The government has said, however, that section 78 does not set 18 as the minimum age for marriage, but simply confers a right on those above 18 to found a family.

Zimbabwe’s Customary Marriages Act sets no minimum age for marriage, while the Marriage Act, which governs monogamous marriages, states that girls under 16 cannot marry without the written consent of the justice minister.

The Criminal Law (Codification and Reform) Act makes it a criminal offense for anyone to promise a girl under 18 in marriage or to force a girl or woman to enter into a marriage against her will. It also makes it a criminal offense to use cultural or customary rites or practices to force a woman to marry. It provides that any adult man who has sexual relations with a willing child between ages 12 and 15 is guilty of statutory rape because children in this age group are considered too immature to make informed decisions about their sexual behavior, so the child’s consent is no defense. However, the law says that if the person is married to a child under 16, having sexual relations with the spouse is not statutory rape.

Zimbabwe has ratified international conventions that oblige it to protect children against child sexual exploitation and abuse, including child marriage. These include the Convention on the Rights of the Child; the Convention on the Elimination of All Forms of Discrimination against Women; the African Charter on the Rights and Welfare of the Child; and the African Charter on Human and Peoples’ Rights. But unless the government revises domestic laws to incorporate the requirements under these treaties, Zimbabwe’s courts have little power to enforce these international legal obligations.

Mugabe is the ‘Godfather’ of Corruption

ZIMBABWE - Human Rights Watch also documented discriminatory social norms that link a girl’s perceived sexual “purity” to her family’s honor. If a girl becomes pregnant, spends the night outside the family home, is seen with a boyfriend, or returns...
Share via
x
More Information
x