Zimbabwe still waiting for batsmen to show up 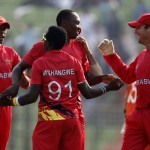 What’s eating Zimbabwe’s cricketers? Their body language was noticeably flat at the start of the first one day international – despite the fact that they’d won the toss and their bowlers were bossing Pakistan around with the new pill – and their batsmen surrendered without so much as a whimper. Without a miraculous spark of inspiration, Pakistan are well placed to secure a series win over the hosts in the second one-dayer on Saturday.

It would be easy to pin the blame on Zimbabwe’s batsmen for the morass in which they currently find themselves. Zimbabwe have managed scores of just 123, 121 and 128 against Pakistan during this tour, and the top-order batsmen appear increasingly skittish and crease-bound with every over of spin they’re forced to face. Yet the gloom which has enveloped them seems to have more than just batting failures at its root. Pakistan’s practice sessions have been filled with more energy and intensity, and their squad genuinely seems to enjoy each other’s company more.

Perhaps all the almosts and if-onlys that Zimbabwe have racked up this year are starting to take their toll. A couple of lucky boundaries here and there, and they might have taken the T20 series 2-0. Yet their luck, if they ever had any, seems to have deserted them – to the profit of the visitors, and most especially the visiting bowling attack.

Pakistan’s bowlers have taken 26 wickets in 77 overs during their trip to Zimbabwe. In the second ODI their spinners took all 10 – just the sixth time in history that slow bowlers have managed the feat. Yet while Pakistan’s bowling stocks have soared in these conditions, that has also served to mask the shortcomings of their batsmen. Scores of 29 for 3 and 34 for 2 in the T20s, and 35 for 3 up front in the opening ODI, suggest a persistent problem.

Pakistan will want more from their batsmen, but Zimbabwe need a miraculous conversion from theirs.

Yasir Shah is already enjoying this trip to Zimbabwe rather more than his last. His Go Go Gadget bag is stocked with a variety of deliveries that allow him to spin the ball anywhere within a 90 degree arc upon landing, and his quick-arm action prohibits the reading of deliveries. A Zimbabwe side susceptible to quality spin bowling had probably hoped things couldn’t get worse after Imad Wasim’s performance in the T20s, but they were made to look hapless by Yasir in the first ODI.

Hamilton Masakadza’s batting is an awe-inspiring sight when he’s in full flow. There’s a simple, muscular brutality to his batting and he’s fearless against pace: witness his assault on Dale Steyn at the World Cup earlier this year. But he has found the going very tough during Pakistan’s visit. Masakadza struck the ball at 87.17 in the T20 matches and used 34 deliveries to score 15 runs in the opening ODI, struggling to ping the gaps for singles and having had his strokeplay neutered by the slow track. Masakadza is the oldest dog in Zimbabwe’s team, but he needs a new trick if he’s to counter Pakistan’s spin attack.

Zimbabwe’s convener of selectors Kenyon Ziehl has admitted that underperforming players can’t be carried by the team forever, but Zimbabwe will be wary of making any rash changes. While their bowling has performed well, Zimbabwe may opt to bring in legspinning allrounder Tino Mutumbodzi to strengthen their batting. Mutumbodzi captained Mashonaland Eagles to success in last season’s Pro50, enjoyed a good season with his English club Eversley, and acquitted himself well in Zimbabwe’s practice matches before this series.

Pakistan are yet to solve their top-order woes but for the moment their bowling attack has more than made up for the inadequacies of the batsmen. Perhaps the only bowler against whom Zimbabwe seemed somewhat comfortable on Thursday was Wahab Riaz, and it’s conceivable that he could be swapped for Rahat Ali as Pakistan look to close out the series. With Imad Wasim and Yasir Shah appearing virtually unplayable at the moment, Pakistan don’t really need offspinner Bilal Asif, but he may get a game if they decide to rest Imad or if the team management wants to see what Asif has to offer, as was suggested before the series.

The gradual build-up of cloud led to overcast and cool conditions the day before the game, but rain remains unlikely – though locals say the first rains could arrive next week. Early morning cloud will aid new-ball bowlers during the first hour in the morning, and despite the menace of Pakistan’s spin attack the pitch is likely to be dry and a touch on the slow side.

“I was excited by the challenge, I like the challenge, and I’m going to take it on again if I get another chance.”
Brian Chari had never faced a bowler with the combination of Mohammad Irfan’s height and pace before, but insists he’s up for the challenge

“I think the Zimbabwean batsmen weren’t able to read my variations when I was bowling googlies or flippers or legbreaks, and that was troubling them a lot.”
Yasir Shah doesn’t think Zimbabwe’s batsmen are able to pick him

Zimbabwe still waiting for batsmen to show up