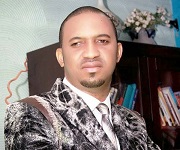 ZIMBABWE – According to News Day, Okafor, the leader of the Liberation City World Outreach Ministries, reportedly said in October last year that Zimbabwe would have a new president by March this year.

The prophecy may not have been well-received by Zimbabwean authorities, News Day reported.

Okafor is not the only “man of God” who has prophesied Mugabe’s death over the past few years. In January, a controversial but hugely popular Malawian prophet, Austin Liabunya, predicted the supposed impending demise of Mugabe.

A Malawi publication, the Maravi Post, reported at the time that Liabunya had predicted, during a New Year’s Day service, that Mugabe would pass away this year.

This was not the first time the maverick prophet had forecast the end of Mugabe.

Mugabe death prophecies reportedly leave a bad taste in the mouths of friends and foes of Zimbabwe’s strongman.

According to New Zimbabwe.com, seven members of Okafor’s church had arrived in Zimbabwe on Sunday to prepare for the pastor’s “grand” arrival at a conference convened by local cleric, Joseph Magorimbo.

The report said five of the Nigerians were deported instantly on arrival and the other two, who arrived on a different flight, were allowed into the country. The two were later taken for questioning, as was Magorimbo.

A source privy to the incident told News Day that Magorimbo and the two Nigerians were questioned for five hours, with Magorimbo accused of inviting Okafor.

A source said security agents claimed, “Okafor prophesied something against the president. But they have not said what it is Okafor said”. The source was quoted as saying, “Okafor was supposed to arrive tomorrow (Wednesday), but he has since cancelled the trip”.

Magorimbo, the report said, was later released while the two Nigerians were bundled into a truck and taken to an unknown destination.

ZIMBABWE - According to News Day, Okafor, the leader of the Liberation City World Outreach Ministries, reportedly said in October last year that Zimbabwe would have a new president by March this year. The prophecy may not have been well-received by Zimbabw...
Share via
x
More Information
x