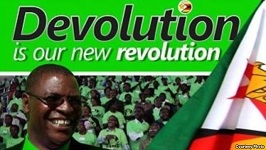 ZIMBABWE – The leader of the opposition Movement for Democratic Change, Welshman Ncube, says Zimbabwe’s economy  is headed towards the 2008 crisis levels when all economic and political indicators were heading south.

In an exclusive interview with VOA, Ncube said the country is headed in the wrong direction. “We are slowly inching towards the state of affairs as they were in 2008, just about everything is going wrong. Businesses are closing; the mining sector is failing, unemployment this year alone … more people (have) lost their jobs than in the entire history of the country. Income levels are falling, quiet dramatically. Poverty is haunting a great number of families. It is now normal to actually find families even in urban areas who do not have a dollar in their pocket at any given time.”

Zimbawe’s annual inflation reached 500 billion percent in December 2008 at the height of a political and economic crisis, forcing the government to abandon the local currency in favor of multiple foreign currencies – mainly the United States dollar and South Africa’s rand – in 2009.

Professor of Applied Economics the Johns Hopkins University Steve H. Hanke in a paper “R.I.P. Zimbabwe Dollar” wrote then that, “Zimbabwe failed to break Hungary’s 1946 world record for hyperinflation. That said, Zimbabwe did race past Yugoslavia in October 2008. In consequence, Zimbabwe can now lay claim to second place in the world hyperinflation record books.

“Zimbabwe is the first country in the 21st century to hyperinflate. In February 2007, Zimbabwe’s inflation rate topped 50% per month, the minimum rate required to qualify as a hyperinflation (50% per month is equal to a 12,875% per year). Since then, inflation has soared.”

Professor Ncube said the tragedy for Zimbabwe is that the ruling Zanu-PF party has no appetite to address the growing economic crisis as the fight to succeed the aging 91 year-old President Robert Mugabe intensifies.

Said Ncube of Zanu-PF members, “They have no interest actually in governing anymore, they have no interest in addressing any of the political, social and economic issues affecting the country. They are occupied, preoccupied 24/7 about politics, about themselves, and not politics to serve, but politics basically to fall over each other, in the name of who will succeed Mugabe whenever  he eventually  goes … that is the tragedy.”

Harare is seething with intimations of conspiracy and counter conspiracy. Last year former Vice President Joice Mujuru was linked to a plot to asasasinate Mr. Mugabe, a charge she vigorously denied and has never been proved. Mrs. Mujuru and her allies were expelled from the ruling party.

But the succession race has only intensified and purges are continuing. Relations between Vice President Emmerson Mnangagwa’s faction and the group that had coalesced around President Mugabe’s wife, Grace, ahead of the party’s acrimonious congress in December last year which led to the ouster of  Mrs. Mujuru are fast deteriorating.

Some political analysts argue that Zimbabwe’s opposition parties seem to be clueless on how to wrestle power from M.r  Mugabe’s Zanu PF party in the 2018 national elections.

The opposition parties are employing uncoordinated tactics in their bid to win the hearts of ordinary Zimbabweans. Some argue that tiredness and frustration are contributing factors to lack of unity.  Mr. Mugabe has been in power since 1980.

DO NOT BLAME THE OPPOSITION

But Ncube said people must not blame the opposition for the worsening economic and political crisis arguing that such reasoning is a “misguided, myopic and ignorant view of politics.”

WHO IS WELSHMAN NCUBE?

Ncube  was born on the July 7, 1961, and  is a politician, lawyer and businessman. He served as the Youth Chairperson of Zapu when he was still a student at the University of Zimbabwe.

Ncube rose to prominence in 1992 when he became one of the youngest professors at the UZ  at the age of 31. He emerged from the University of Zimbabwe Faculty of Law as a professor, who had much promise and hope for Zimbabwe based on his good grasp of civil rights and the legal implications, as he became one of the founding members of the MDC and became the first secretary general in 1999.

He was instrumental in the Global Political Agreement negotiations that led to the formation of the Zimbabwean Government of National Unity (GNU). In the GNU he became the Minister of Industry and Commerce.

Diasporans now popping up Mugabe govt as remittances shoot up

Mugabe thanks God for longevity

ZIMBABWE - The leader of the opposition Movement for Democratic Change, Welshman Ncube, says Zimbabwe's economy  is headed towards the 2008 crisis levels when all economic and political indicators were heading south. In an exclusive interview with VOA, N...
Share via
x
More Information
x