ZIMBABWE – Zimbabwe will soon be an economic hub in Southern Africa and Switzerland would not want to miss out on that opportunity, newly appointed Swiss representative to Zimbabwe, Mrs Ruth Huber said yesterday.

Mrs Huber’s comments come hard on the heels of the release of the 2015 United Nations Development Programme report on Monday, that ranks Zimbabwe as having the fastest average growth in human development and the most improved quality of life in Africa.

Zimbabwe topped the 52 countries surveyed, among them Botswana, Namibia and South Africa.

European countries and the United States — that imposed illegal economic sanctions on Zimbabwe at the turn of the new millennium — have also been making overtures to engage Zimbabwe in a bid to benefit from the vast investment opportunities in the country that have seen China and Russia strike multi-billion mega deals with Government.

Mrs Huber, who was speaking after presenting her credentials to President Mugabe at State House yesterday together with other new envoys from Canada, Malawi, Egypt and Kuwait, said she was looking forward to her four-year tenure in Zimbabwe.

While acknowledging the strides Zimbabwe has made on the socio-economic front, Mrs Huber, however, said her Government would remove the sanctions regime “when the time is due.”

“It is really a pleasure and an honour for me to meet President Mugabe,” she said.

“We had a very good exchange about the relations between our countries, about strengthening our relations over the coming years and strengthening our presence here. For us, Harare will be the regional development hub for Southern Africa, so it (Harare) is gaining importance in our bilateral relations.

“I am really looking forward to my four year stay in this beautiful country and I hope that I can get to know a lot of people and institutions of this very diverse country.”

On sanctions, Mrs Huber said: “We are assessing and evaluating the situation continuously and maintaining contacts with all sides — Government, institutions and people in this country. My Government will make decisions when it is due time.”

Canadian ambassador, Mr Kumar Gupta, said his focus would be on building on the “love and warmth” existing between the two countries.

“We talked about bilateral relations and just the deep warmth that our two countries share,” he said.

“I think the centrepiece of our relationship is people to people relations. Canada has partnered with Zimbabwe for many decades. The love and warmth between our people is deep and that is something I want to build on.

“There are hundreds of students studying in Canada and we think that’s an important way for Zimbabwe to develop.”

Mr Gupta ducked off media questions on the illegal sanctions.

He said: “I think the conversation I had with the President is a private one between a Head of State and a representative of another Head of State. For that reason, I would rather respect the privacy of that conversation.”

“We discussed bilateral relations between our two brotherly and friendly countries,” he said.

“The President gave some instruction that we must enhance the relations to mutually benefit our people.”

Said Mr Bader Nasir Alhouti of Kuwait: “I conveyed best regards from His Highness the Head of State of Kuwait, wishing Zimbabwe all the best. We discussed many issues related to our people and many areas of cooperation.”

He said he had thanked President Mugabe for Zimbabwe’s support during the early ‘90s when Kuwait was under invasion from Iraq.

New Malawian ambassador to Zimbabwe, Mrs Annie Kamwendo, said her discussions with President Mugabe focused on the long term relationship; “which has always been there given the historical background which exists between the two countries.” 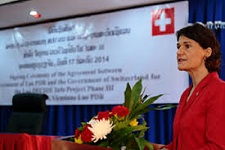 ZIMBABWE - Zimbabwe will soon be an economic hub in Southern Africa and Switzerland would not want to miss out on that opportunity, newly appointed Swiss representative to Zimbabwe, Mrs Ruth Huber said yesterday. Mrs Huber’s comments come hard on the hee...
Share via
x
More Information
x