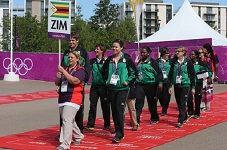 ZIMBABWE – The Rio 2016 Olympic Games are fast approaching and Zimbabwe is set to compete at the Summer Games for the ninth time since 1980.

Zimbabwe has a total of eight Olympic medals to date, seven of which were won by swimming sensation Kirsty Coventry at Athens 2004 and Beijing 2008, while the Golden Girls hockey team of 1980 won the other one.

Despite sending just seven athletes to London in 2012 — the lowest ever Olympic Games contingent from Zimbabwe — the Zimbabwe Olympic Committee (ZOC) believes that the consistent appearance at the global sporting event is testimony that the country is producing world-class athletes.

“The ninth appearance of the country at the Summer Olympic Games, especially by qualified as opposed to invited athletes, bears testimony to the potential and ability of the country to produce world- class athletes,” ZOC chief executive officer Anna Mguni said.

“However, to sustain and grow these prospects and talents requires prioritisation, long-term planning and unrelenting support from all cooperating partners at the various levels and stages of sport development. It also requires sound, informed policy and well-managed implementation of the programmes and activities that contribute to the growth and development of sporting success, as modelled by a number of prosperous sporting nations worldwide.”

This time around, ZOC will send a much bigger contingent to Brazil — 25 athletes including the Zimbabwe women football team, which has already booked tickets for Rio in August.

However, ZOC remains coy about setting a medals target having failed to pick any at the previous Games in London.

“All athletes at this level will train and prepare with ultimate success as a target. The ZOC has not set medal targets. It would be undue and unfair [at this stage] to make unrealistic and uninformed pronouncements regarding targets. Performances are best assessed when comparing current form and performance against standing world performances and records,” Mguni said.

She noted that there had been a general improvement in the quality of Zimbabwean athletes in the past four years evidenced by the number of athletes that had already made the grade.

“For any athlete to attain an Olympic qualification standard and be able to compete at the ultimate level of excellence is in itself, testimony to personal improvement: therefore there have been improvements recorded in a number of disciplines and areas,” she said. It is also pleasing to note that the team size will increase due to the qualification of a team sport, itself a reflection of some improvement in performance by the team. The important factor hereon is building upon and sustaining the levels of progress registered.”
Women’s football will make its debut appearance, while equestrian and golf are also in the running to have a first-time representation at Rio 2016.

In her Olympic Games qualification update, Mguni gave a list of disciplines that sealed a place at the quadrennial sporting extravaganza.

The National Women’s Football team — the Mighty Warriors — make the story of the Zimbabwe Olympic team after becoming the first team to represent the country at the Olympic Games since the gold-winning women’s hockey team of Moscow 1980. They will take part in the 12-team contest. Each participating team is limited to an entry of 18 athletes and seven officials.

In aquatics, multiple Olympic medalist Coventry will be making her fifth Olympiad since making her debut in Sydney in 2000 while she might also be joined by another male swimmer.

Four marathon runners namely Pardon Ndhlovu, Wirimayi Zhuwawo, Gilbert Mutandiro and Cuthbert Nyasango have attained qualification standards to date and are in contention for the final three slots on the team.

In shooting, Michael Nicholson attained the required qualifying standard at the Continental Championship in December 2015 and is set to compete in the Double Trap event in Rio.

The National Athletic Association of Zimbabwe is said to have provided a 20-athlete list with candidates still to compete in qualifying competitions for road marathon (men and women) track and the combined (decathlon) events.

The qualification period closes on July 11 2016 with a total of 2005 athletes scheduled to compete in 24 men’s and 23 women’s events respectively.

An estimated four additional athletes are expected to qualify over and above the marathon athletes.

Other disciplines that have athletes pursuing qualification before the respective cut-off dates include equestrian
UK-based horsewoman Camilla Kruger achieved the requisite qualifying score to be considered for Rio 2016 in the Equestrian Eventing Competition, which is part of the three equestrian disciplines that are offered at the Olympic Games.

After meeting the qualification criteria in two events, she and her horse Biarritz are currently working at acquiring the requisite amount of ranking points to win the Olympic slot over her South African and Tunisian rivals.

In golf, the qualification period ends on July 11, 2016 and Brendon de Jonge is currently ranked at number 40 and will be looking to be the first golf representative for Zimbabwe at the Olympics.

The rugby seven side, The Cheetahs are the only team still in the running for Olympic Qualification and will re-attempt qualification at a repechage event scheduled for May 2016.

ZIMBABWE - The Rio 2016 Olympic Games are fast approaching and Zimbabwe is set to compete at the Summer Games for the ninth time since 1980.  Zimbabwe has a total of eight Olympic medals to date, seven of which were won by swimming sensation Kirsty Covent...
Share via
x
More Information