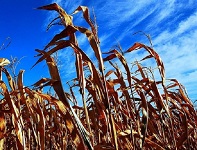 ZIMBABWE – Zimbabwe has turned to Ukraine to supply more than half a million tonnes of maize to stave off starvation.

The country’s vice president says that imports from Ukraine will move the country into a safe zone after widespread crop failures were declared a national disaster.

Speaking to the Herald, Vice President Emmerson Mnangagwa says he thinks Zimbabwe should now be comfortable.

In addition to 500,000 tonnes of maize coming in from Ukraine, another 115,000 tonnes is to be brought in from neighbouring Zambia.

Mnangagwa told the paper this deal took place two or three weeks ago.

The vice president didn’t mention the Zambian government’s recent decision to suspend maize exports to Zimbabwe; the hope will be that the transaction was concluded before that decision was made.

Around three million Zimbabweans are facing hunger after poor rains wiped out crops and at least 20,000 cattle are believed to have died.

ZIMBABWE - Zimbabwe has turned to Ukraine to supply more than half a million tonnes of maize to stave off starvation. The country’s vice president says that imports from Ukraine will move the country into a safe zone after widespread crop failures were d...
Share via
x
More Information