After capsizing for 82 with a little less than 20 overs in the shed on Christmas Day, Zimbabwe showed spunk both with the bat and ball in the second ODI. Despite the marked improvement, they conceded a 2-0 lead to Afghanistan. This leaves Zimbabwe under so much pressure that unless they catch up, the series is dead. They will hope the arrival of the New Year will pave the route for a riposte.

On Tuesday, Peter Moor and the returning Hamilton Masakadza found ways to keep the scorecard ticking with risk-free batting, and Craig Ervine plugged the Sean-Williams shaped hole in the middle order. Elton Chigumbura then inspired the defence of 253, but Mohammad Shahzad’s unbeaten 131 – the highest individual score by an Afghanistan batsman in ODIs – sealed the deal. From launching the helicopter shot to just acknowledge that he was a fan of MS Dhoni to being left out of the 2015 World Cup on fitness (or lack of fitness) grounds to becoming the rock at the top of the order, Shahzad’s metamorphosis has mirrored that of Afghanistan’s. On a night when his team suffered late hiccups, Afghanistan’s MS followed his hero’s theme, taking the game deep and calmly finishing it off. His opener partner Noor Ali Zadran is the second-highest run-scorer in the series, but the middle order is yet to be properly tested, an area which Zimbabwe will seek to exploit if they manage early inroads.

In the spin face-up, however, Afghanistan have the clear edge. Amir Hamza has offered control with the new ball, while Mohammad Nabi has done the same in the middle overs. Rohan Barakzai, who was handed his debut in the second match, did not perform badly either. Afghanistan eased past Greame Cremer’s threat in the second game, but the legspinner could perhaps do well in harness with Tendai Chisoro.

On a surface rolled out in favour of spinners, Dawlat Zadran‘s pace and reverse-swing has menaced the opposition. His yorkers have been bang on target, as they were during the series in Zimbabwe in October. In the 2015 World Cup, Dawlat busted Majid Haq’s bat during Afghanistan’s maiden World Cup win, in Dunedin.

For somebody who features in the middle order for his domestic side Rhinos, Peter Moor has promised to fix Zimbabwe’s mess at the top of the order. Moor played a bright hand on Tuesday, stroking his maiden ODI half-century, but Zimbabwe will want more from him, given their dire state.

With Richmond Mutumbami having been dismissed cheaply in both ODIs, once in the middle order and the other time at the top, Zimbabwe would consider recalling allrounder Chamu Chibhabha and passing over the keeping gloves to Moor. They may also opt to go for left-arm spinner Chisoro in place of Wellington Masakadza in a like-for-like replacement.

Despite some young talent waiting in the wings, Afghanistan may not experiment yet, considering the series is still not in their grasp.

If the first two matches are anything to go by, the bat-first ploy should continue, with the ball doing more under lights. The old ball had also stopped a bit on the batsmen on Tuesday.

“Our coach Inzamam-ul-Haq is a legendary cricket player and his presence in the team is outstanding and we are receiving tips and guidance for improving batting line. Now we felt the difference in our batting. Manoj Prabhakar is also helping a lot in bowling… It [Afghanistan’s rise] is because of guidance of these two coaches.”
Mohammad Shahzad 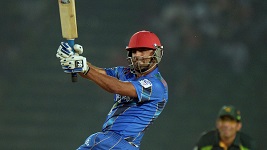 Zimbabwe under pressure to stay afloat

ZIMBABWE - Match facts Saturday, January 2, 2016 Start time 1500 local (1100GMT) Noor Ali Zadran has formed a solid union with Mohammad Shahzad at the top of the order © AFP Big Picture After capsizing for 82 with a little less than 20 overs in the shed o...
Share via
x
More Information
x