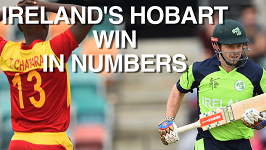 ZIMBABWE – Ireland go into their three one-day internationals against Zimbabwe in the hope of defending their lead over their opponents in the world rankings.

Ireland are currently ranked 10th and Zimbabwe 11th, with the Irish holding a two-point advantage over their rivals.

Zimbabwe fell to a 2-1 series defeat by Pakistan in Harare last week.

They are keen to re-establish their place in the world’s top 10 but the Irish could extend their advantage as much as 14 points with a 3-0 victory, or six points if they take the series 2-1.

Conversely, a Zimbabwe series win would move them above Ireland, while the tourists would drop below Afghanistan into 12th place if they lose 3-0.

Close finishes in the past

Previous meetings between the two sides suggest a very tight affair, with the last six encounters between the sides bringing three final-over finishes, including the famous final-ball tie at the 2007 World Cup.

The sides then met in another World Cup tie earlier this year, with Alex Cusack producing a spectacular final over to securea five run win for Ireland

Cusack has since retired, but the rest of the squad from that day have travelled to Zimbabwe, and along with Stuart Poynter all are fit heading into the opening game.

The forthcoming series will take place at the Harare Sports Club, the same ground where the three Pakistan games were played.

A theme that emerged in those fixtures was the dominance of spin bowling, with Zimbabwe losing all 10 wickets to spin in one of those games – only the sixth time that has happened in ODI history.

That leaves Ireland coach John Bracewell with an interesting dilemma over whether to play two full-time spinners, along with Paul Stirling as a third option, or stick with the more traditional line-up of one specialist spinner and Stirling as the second.

Stirling was part of the squad the last time Ireland toured Zimbabwe in 2010, Zimbabwe winning a tight series 2-1 on that occasion, and he is keen to make up for that this time around.

“It was tough to take coming here and losing the series last time, so we are really keen to make sure we come away with a win this time,” said the Middlesex batsman.

“Conditions are really tough here, but we have worked hard this week to acclimatize to the heat and the altitude. We know how important these matches are in terms of ranking points and we want to leave Zimbabwe ranked 10th in the world.”

ZIMBABWE - Ireland go into their three one-day internationals against Zimbabwe in the hope of defending their lead over their opponents in the world rankings. Ireland are currently ranked 10th and Zimbabwe 11th, with the Irish holding a two-point advantage...
Share via
x
More Information