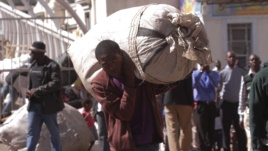 ZIMBABWE – Some vendors in Bulawayo say the government of Zimbabwe and local authorities should recognize the important role they are playing in contributing towards the country’s gross domestic product.

The vendors, who marked International Street Vendors’ Day in Bulawayo, said they want the government to involve them when coming-up with policies that help their sector.

Scores of vendors under the National Vendors Union of Zimbabwe (NAVUZ) gathered at Stanley Hall in Bulawayo’s Makokoba high density suburb on Monday in a belated commemoration of the vendors’ day.

Apart from the speeches and solidarity messages that were delivered, those who attended were treated to some short drama including a parody depicting how a number of them are sometimes chased off the streets or arrested and have their wares confiscated by municipal and national police.

NAVUZ chairperson for Renkini branch, Vimbai Manyanye, told Studio 7 she was happy to participate in the commemorations as they help highlight the importance of vendors and their role in the economy given the high unemployment in the country.

“Today is an important day for us because we vendors have become an important part of the economy; we are the ones who are contributing significantly in uplifting the economy,” said Manyanye.

Obert Manduna, the NAVUZ chairperson for Bulawayo, said the International Street Vendors’ Day is commemorated globally every November 14th, adding that although his organization had marked the day in Harare, it also decided to hold commemorations in Bulawayo in honour of local vendors.

NAVUZ chairperson Stendrick Zvorwadza, who also attended the event, said the commemoration brings vendors together helping them to celebrate their achievements and discuss issues affecting them while also giving his organization a chance to impart to the vendors the importance of being involved in the making of policies that affect them.

“We want to have vendors participate and contribute in formulation of policies and legislation that protect them. We have in excess of 5.7 million people in Zimbabwe who are vendors and this constituency is too big a group to be ignored in policy formulation.”

International Street Vendors’ Day was first observed globally in 2012 through efforts by StreetNet International, a grouping of organisations that represent vendors in various countries as a way of highlighting their importance in the global economy.