ZIMBABWE – The educational facility of the search engine has come into question after Google last week released an infographic mapping top searches across the world. Digital footprints worldwide indicate that the search engine is principally wired around entertainment, with education surfacing as an afterthought. Google’s cloud outlines provide an interesting perspective into the debate about the utility of cellphones in Zimbabwe schools. Firstly though is a look at the latest indices.

The infographic headed “The Most Googled Person in Each Country in 2015” speaks to the showbiz wiring of the Internet, with Kim Kadarshian, Lionel Messi, Nicki Minaj, Christiano Ronaldo and Rihanna dominating web preferences on every continent.

The search engine is by far the most popular service from the technology empire, accounting for 71,36 percent of site visits. Educationally themed service Google Scholar is the least subscribed Google Service at 0,14 percent.

Away from celebrity pregnancies, Oscar red carpet dresses, beauty, cars and dogs, there are also “what”, “how” and “where” questions which sometimes suggest an educational drift but the showbiz mood is not far away with questions “Where is Disneyland?” trending.

Given the prevailing web preferences, and the fact that the Internet is a youth phenomenon, one wonders whether assigning it to school Zimbabwean students is not a little too ambitious.

In light of the trends, we revisit pertinent debate as to whether cellphones in schools aid or hinder learning. Early last year, Primary and Secondary Education Minister Lazarus Dokora (how would he dare a global tide, anyway?) torched controversy when he condoned the use of cellphones in schools.

Minister Dokora dug in, rightly noting that at this point in the digital revolt it would be retrogressive to refuse students access to cellphones given the educational capacity of the gadgets.

He hinted that cellphones could be an informal extension of computerisation schemes, something this writer cannot technically dispute given that this article is being generated from a hand-held word processor.

Minister Dokora told Parliament cellphones were as good as computers because of their compatibility with productivity functions, hence the decision to lift the ban. “What you now call a cellphone is actually a computer in itself because of convergence,” he said.

“We have told teachers not to fight technology. We do not want our pupils to be surprised by these gadgets when they are at university. Guidance is, however, necessary about their use, like some sites could even be closed.”

Besides developing a web-wise aptitude and utilising productivity applications on their cellphones in the interest of a wholesome learning experience, a talented tenth, to borrow WEB Du Bois’s phrase, might well be on their way to being the next developers through exposure.

However, before we speak about access to cellphones and the educational, technological and professional possibilities thereof, it is a fair step to discuss content. Is enough content relevant to the educational needs of Zimbabwe’s young netizenry being produced and foregrounded in the country?

It is blindingly clear that Zimbabweans cannot map optimistic possibilities for cellphones in schools without developing content equal to the need. There is no evidence of such endeavours but a few indie developers are bent to the task.

Herald Review this week gives the nod to five enterprising web-based educational toolkits, some of them still to be adequately furnished, all the same handy and forward-thinking.

Revision which turned one yesterday claims to have amassed 50 000 unique users so far, with 10, 000 users every month and 500 daily, figures this paper could not ascertain.

So far notes for O-Level Shona, Business Studies, Commerce, English, Geography, History, Principles of Accounts and Integrated Science and question papers for various subjects feature on the site, but the content is thin.

Digital Frontline, the team behind the website, is driven by the philosophy that education must be fun, painless and relevant to generational trends instead of being set to the whims and ages of its administrators.

Garikai Dzoma and Donald Mutekede accountancy graduates from the University of Zimbabwe thought of coming up with the project after failing to land jobs for which they had trained.

“When we finished school, both of us couldn’t find work. So, we decided to become part time teachers and then as we did our work we discovered that when you ‘google’ for something on internet, for instance subjects like History, you find that European topics tend to dominate,” Dzoma said in a recent interview.

“For example, when you want to know what the ‘Scramble for Africa’ was all about and the ‘Mfecane’ you can’t access all that, then there is an issue of not finding certain things in Shona.”

Having noticed the deficit, they uploaded Shona-grammar to the website to warm reception by users.

More subjects were added, culminating in the current website.

Hopefully, the minds behind the project keep their promise and upload up-to-date content across the disciplines.

Mazwi Online Store Another enterprising web-based educational toolkit is Mazwi Shop, an e-book store, for the African market founded by Tafadzwa Makura in 2012. The disruptive start-up stands out of Zimbabwe’s hive of technological start-ups as a forward-thinking, make-it-happen e-commerce response to a cultural problem.

Students, from primary to the tertiary level, stand to benefit from professional content, including full-length biographies, history and political titles, and creative works.

A growing number of previously unpublished authors are scrambling for vendor dashboards on the Zimbabwean version of Amazon.

“We look to capitalise on failure by mainstream e-book markets such as Kindle Store, Nook and ibooks offer a service that is sensitive to local realities,” Makura said recently.

Creative notables such as Charles Mungoshi, Shimmer Chinodya and NoViolet Bulawayo and authorities such as Brian Raftopoulos and Fay Chung feature prominently on the marketplace.

When customers purchases an e-book on the site, they can download it to their devices a maximum of six times after which they cannot download it. File-sharing is disenabled to curtail piracy.

The web-based shop moves away from international practice whereby one must have a Mastercard to purchase e-books and incorporates mobile money transactions which are in vogue locally.

“The issue of payment methods was a challenge for both Zimbabwean authors and customers on the international marketplaces. We have incorporated local mobile money methods to make the transactions less cumbersome,” Makura said.

Mazwi is also grafting in interactive plug-ins to connect writers directly to their audiences.

The author page is a mini-website which offers readers the option of following their favourite writers to stay posted on their new projects.

The newest kid on the block is Chii?, a Shona Language Learning application designed by a UK-based company MJDK Ltd. to promote the learning of Zimbabwe’s widely spoken language among beginners and children in the Diaspora.

MJDK spokesperson Jane Doka said the App was motivated by the need to help Zimbabwean children in the Diaspora retain their identity and appreciate their mother tongue.

The app may also be useful to young students and a launch pad for more such ventures to promote Zimbabwe’s officially recognised languages which are still lacking in terms of digital content.

At the moment, Shona and Ndebele are the only languages being taught autonomously while Tonga, Shangani, Sotho, Kalanga and Nambya are being developed for the primary school syllabus.

However, content remains a crying need for all local languages.

Chii? comes across as an timely response to this need.

It is also an important intervention at a time when more Zimbabwean children are growing up detached from their “roots.”

“We had to face the fact that the environment in which we are raising our children is very difficult for families to preserve their linguistic heritage which plays a crucial part to some cultural dynamics parents want to pass on,” Doka said in an interview.

“Some children out here in the Diaspora find themselves confused in a sense about where they come from, especially if they have never had the opportunity to visit their parents’ country of origin.

“Although we do appreciate that the diaspora is where they are being raised and will likely settle in their adult years, we felt it was right to present them with an opportunity to learn, appreciate and consciously make choices about their linguistic heritage.

“Whilst we believe in embracing other cultures and languages since the world are now a global village, we do not believe that our own linguistic legacy should be dismissed as irrelevant in the mixed communities many of us have settled in.”

Looking Ahead Web-based educational content remains the urgent need of the hour. More developers must come aboard to utilise the growing penetration of cellphones and computers and help students to get educational value out of their gadgetry. 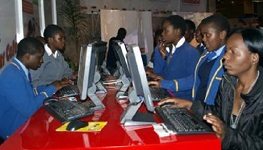 ZIMBABWE - The educational facility of the search engine has come into question after Google last week released an infographic mapping top searches across the world. Digital footprints worldwide indicate that the search engine is principally wired around e...
Share via
x
More Information
x