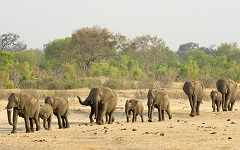 ZIMBABWE – “We will not apologise to anyone because they are our elephants and our people live with a huge population of elephants and bear the trouble of interacting with them.”

She said Zimbabwe has more than 80,000 elephants and there was a critical water shortage this year, especially in Hwange National Park.

The country’s flagship wildlife arena has no rivers and the water pans only survive with donations for fuel to pump from underground wells.

“There is a drought and soon the elephants will die. It is better we sell them especially to those who can take good care of them,” Mrs Muchinguri-Kashiri said.

She said Zimbabwe also needed to raise funds to fight poaching: “Poachers are getting complicated we should also invest in sophisticated anti-poaching systems.”

Chimelong Safari Park, a vast Chinese corporate leisure centre in the southern city of Guangzhou which claims to be the largest wildlife sanctuary in Asia, has also enquired about buying lions, baboons and hyenas, the minister added.

Wildlife experts say Zimbabwe has enough lions in most of its national parks.

Last year Zimbabwe’s Parks and Wildlife Management Authority, which receives little government funding and raises money from hunting and tourism to fight poachers and maintain its conservancies, took advice on how to reduce trauma for elephants for export.

The elephants previously sent to China were all about five years-old when captured and were held in pens in the park for several months so they became used to humans ahead of their air trip from Harare to China.

State veterinarians accompanied the elephants to China and remained with them for several weeks, according to officials in the wildlife ministry.

Ian Ferguson, who owns the last private game ranch in Zimbabwe, said it was a pity the country had to sell wildlife but it was better the animals were sold than die of hunger.

“What should be done? Shoot them?” he said.

“If there is no value to wildlife it won’t be preserved, so if that means selling some of them, then that’s how it has to be. Some animal activists are not thinking straight, they are emotional and do not understand realities of preserving wildlife.”

Earnings from wildlife plunged after the US banned importation of elephant head trophies from Zimbabwe two years ago and most American hunters have since transferred their business to South Africa.

ZIMBABWE - “We will not apologise to anyone because they are our elephants and our people live with a huge population of elephants and bear the trouble of interacting with them.” She said Zimbabwe has more than 80,000 elephants and there was a critical...
Share via
x
More Information