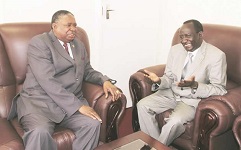 ZIMBABWE – Zimbabwe and Ethiopia’s economic turnaround blueprints are similar and this is an opportunity for the two countries to exchange notes and share experiences, the outgoing Ethiopian representative Dr Koang Tutlam Dung has said.

“I told the Acting President that the two countries have been pursuing economic blueprints that are similar,” he said.

“They have many similarities and this is an opportunity for officials from the two countries to exchange notes and experiences.

“We have had the Finance and Economic Development Minister (Patrick Chinamasa) from this side visiting to hold discussions with his counterpart back in Ethiopia.”

Dr Dung, who is leaving after spending four years in Zimbabwe, said the historical relations between the two countries had been enhanced during his tenure with several agreements being signed.

“One is the air services agreement and another one was a Memorandum of Understanding between Addis Ababa University and the University of Zimbabwe,” he said.

“In the last two years, some companies from Ethiopia have been participating at the Zimbabwe International Trade Fair displaying leather products and also at the Sanganai/Hlanganani.

“This enhances the economic co-operation that we have. We have two agreements that are in the pipeline that is an MOU for the Ministries of Tourism to co-operate and on the twinning of the city of Harare and Addis Ababa.”

Ethiopia’s flagship carrier, Ethiopian Airlines did not stop operating its flights to Harare during Zimbabwe’s hyper inflationary period, a demonstration of a strong bond between the two countries.

Dr Dung said he looked forward to the forging of new business linkages between the two countries.

“This is just the beginning as we are expecting a lot of interaction and I hope my successor will carry over,” he said.

“We started from a low base and I am happy with the progress although we need to strengthen it. We have also been participating in the Harare International Carnival for many years and we have had an Ethiopian cultural group coming to showcase the Ethiopian culture.

Zimbabwe, he said, had great economic potential as it had vast natural resources and a vibrant workforce.

Said Dr Dung: “I have seen that the economy is improving and this is good news not only for Zimbabwe, but for the whole (African) continent because with one country advancing economically it will also contribute to the advancement of the economy of the whole continent.

“I leave with a good and optimistic view of Zimbabwe and wish the Zimbabwean people and their Government the best of luck.”

He said there had been limited commercial and business connections over the years yet there were many commodities and products for bilateral trade between Harare and Addis Ababa.

ZIMBABWE - Zimbabwe and Ethiopia's economic turnaround blueprints are similar and this is an opportunity for the two countries to exchange notes and share experiences, the outgoing Ethiopian representative Dr Koang Tutlam Dung has said. Speaking after bid...
Share via
x
More Information