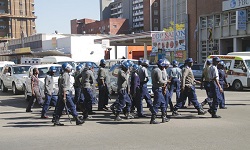 ZIMBABWE – First-time visitors to Harare would have been forgiven a fortnight ago for thinking they had unwittingly entered a war zone when riot police and MDC-T youths fought running battles in the city centre.

It could have been a scene straight out of apartheid-era South Africa or even the Palestinian territories of West Bank and Gaza, as overzealous police beat up the youths and arrested others. Many felt the police could have avoided such skirmmishes by merely keeping an eye on the youths as they exercised their constitutional right to demonstrate peacefully. In fact, so determined were the police — long accused of being biased against the opposition party — to mete out physical punishment that they blocked Nelson Mandela Avenue and stopped cars from passing through, trapping the youths whom they then severely assaulted.

A total of 35 people, including some who claimed they were either vendors or passers-by, were arrested and taken to Harare Central Police Station. But police spokesperson Charity Charamba defended the heavy-handed approach, saying the police would not tolerate violent behaviour.

“Thirty-five people were arrested. They started protesting at Harvest House, challenging why they were being treated unfairly. They were intercepted by the police when they started marching towards parliament. They began throwing stones and missiles towards police officers. No officer was hurt, but we are sending a strong warning that we will not tolerate any violence or misconduct,” Charamba said after the incident.

Observers say police prevented the youths from exercising their constitutional right to free expression through demonstrating. The youths were demonstrating against the perceived mismanagement of the economy by President Robert Mugabe, in power since independence from Britain in 1980.

According to Section 59 of the constitution, “every person has the right to demonstrate and to present petitions but these rights must be exercised peacefully”.

The police were so heavy-handed that they even arrested photojournalist Shadreck Manyere, whose crime was to film the clash between the demonstrating youths and the police.

A week earlier, the law enforcement agents had arrested journalists Brian Chitemba, Mabasa Sasa and Tinashe Farawo over a story alleging that a top cop was involved in the poaching of the country’s elephant population in Hwange National Park.

These arrests are the latest in a series as human rights abuses continue despite the adoption of a constitution which provides for a wide range of human rights under the Declaration of Rights, including media, economic, social, cultural, civil and political rights.

Zimbabwe adopted the current constitution in 2013 during the unity government after a referendum overwhelmingly approved the draft crafted through long and tortuous negotiations between Mugabe’s ruling Zanu PF party and the MDC formations.

For many in Zimbabwe, the southern African region and the West, including the then European Union (EU) ambassador Aldo Del’Ariccia, the new constitution promised improved civil and other liberties which would further the democratisation agenda.

If Del’Ariccia was still around, he might have been forced to take back the bloc’s optimistic words that Zimbabwe had made progress towards a democratic dispensation which fully respects and upholds individual freedoms.

“Recognising the importance of the referendum and the adoption of a new constitution as a major step along this road the EU, in line with its commitment to suspend a majority of remaining restrictive measures, has today agreed to immediately suspend the application of measures against 81 individuals and eight,” the EU said in a statement read by Del’Ariccia in 2013.

The EU ultimately suspended the measures on all individuals except Mugabe and his wife Grace. Del’Ariccia staunchly defended the decision, insisting even as he left the country last year that Zimbabwe was firmly on the path to democracy.

However, police’s actions suggest that Zimbabwe could in fact be hurtling towards becoming a police state. Mugabe, his wife and other top government and Zanu PF officials have verbally attacked and threatened journalists in the last few months.

As if to underscore that Zimbabwe isbecoming a police state, there is heavy police presence through countless roadblocks. One can encounter as many as five roadblocks along a 10km stretch of road without a clearly defined purpose or justification. There are also many traffic police officers on motorbikes patrolling the streets, including smaller roads in the suburbs, stopping motorists haphazardly.

One could be forgiven for thinking this was literal evidence of a police state. But there are actually worse characteristics of the phenomenon that were articulated by the American attorney Richard Stevens.

Proof of a police force serving “the will of the state rather than responding to criminal misdeeds” seem to have been obtained three weeks ago in the arrest of Chitemba, Sasa and Farawo.

“We are expecting police to be in the Hwange National Park looking for the poachers and not in the newsrooms looking to arrest journalists,” remarked Foster Dongozi, the secretary-general of the Zimbabwe Union of Journalists.

He wrote in his column: “What has stunned the nation is just how the police, acting in the name of the people, state and government, did not feel enjoined to consult or even inform this key department (Information ministry).”

Manheru added: “And this is the second time the police have done so, after the Baba Jukwa thing which came to a spectacular crash, vastly diminishing government legitimacy in the eyes of the governed.”

Soldiers are also complicit in the state repression, with reports last week they attacked a group of 30 ex-ZBC workers who had besieged the state broadcaster’s Pockets Hill head office last Friday to inquire about their packages following their summary dismissal on three-month notices.

There has been no corresponding interest, however, in matters that affect ordinary citizens as demonstrated by among other things the relative lip service that has been paid to the abduction and enforced disappearance of journalist-cum-political activist Itai Dzamara.

Dzamara, who was allegedly abducted by state agents, has been missing since March.

Two months after Dzamara’s disappearance, a Zanu PF activist, Karimboni Nyemba, also disappeared in a case linked to the party’s internal succession fights in Chiredzi in May and has not been seen or heard from ever since.

Unsurprisingly, the latest Amnesty International report for the 2014/15 period paints a gloomy picture of the human rights situation in Zimbabwe, with government and its henchmen fingered as the worst culprits.

“Violations of economic and social rights continued, including forced evictions in rural and urban areas. Mass job losses occurred as companies closed due to an unfavourable economic climate. Intra-party violence was recorded in the ruling Zanu PF party and the main opposition party. There were reports of torture by the police,” the report says.

In all this, sceptics argue Zimbabwe shows itself to be no better than other rogue states like Syria where torture, abductions and enforced disappearances are the order of the day.

American author John Whitehead who noted that in a police state there is “secrecy, a nation of suspects, militarisation, surveillance, widespread police presence, and a citizenry with little resource against police actions”.

Against such a background, it appears it has been a false dawn in Zimbabwe where government’s evident failure to deal with mounting economic problems has seen increasing heavy-handedness in dealing with any manifestations of dissent by the civilian population.

Am not HIV+, Am diabetic – Tuku

ZIMBABWE - First-time visitors to Harare would have been forgiven a fortnight ago for thinking they had unwittingly entered a war zone when riot police and MDC-T youths fought running battles in the city centre. It could have been a scene straight out of a...
Share via
x
More Information
x