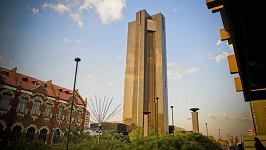 ZIMBABWE – The Reserve Bank cargo plane that was detained in Zimbabwe this week when a body was discovered on board is under heavy military guard with millions of freshly printed Rands still on it.

According to the Aviation Herald website, the McDonnell Douglas MD-11 cargo plane, owned by American company Western Global Airlines, landed in Belgium on Saturday February 13. Before the aircraft left Munich for South Africa carrying the newly printed South African currency – likely printed by German-based firm Giesecke and Devrient – it undertook a trip from Entebbe in Uganda to Liege in Belgium. The plane was being leased by UK-based company Airline Network to deliver the bank notes to South Africa.

Various reports indicated that the plane landed in Harare on Sunday morning to refuel, although the MD-11 has the long-range fuel ability to cover the distance between Munich and Durban. Aviation expert Linden Birns told the MG that in order to determine that the plane needed to refuel, factors such its available fuel before departure, weather and model of the plane must be taken into consideration. However, Mavimbela said that the cargo plane’s Zimbabwe stop was an “alternative emergency” as the Durban airport was not ready to receive the plane.

It was only when the aircraft stopped at the airport in Harare that blood stains on the side of the plane were noticed by officials. A body of a male was allegedly discovered and removed from the aircraft. News reports said there were six people on board the flight – two Sarb officials and four flight crew whose passports have been seized while the Zimbabwean police continue their investigations. “All those that were on board are staying in a hotel while investigations take place and they are all co-operating,” Mavimbela added.

A post-mortem is currently underway as Zimbabwean police attempt to determine the nationality of the deceased man.  At the time of going to press, Mavimbela told the MG that the post-mortem results were not available as yet and the South African government will co-operate with the Zimbabwean officials until the case is resolved.

Both Airline Network and Western Global Airlines refused to comment.

Tuku ‘back in business’ after a short rest