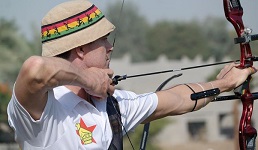 The 36-year-old archer secured one of the five individual berths on offer after reaching the individual recurve quarter-finals, while also finishing with a higher ranking than Ivory Coast’s Rene Kouassi.

Should Sutherland be chosen to compete at the Games by the Zimbabwe Olympic Committee, he would become the first archer to represent the country at the Olympics since Wrex Tarr in 1988.

“There has been no formal notification to ZOC, so I can neither confirm nor deny the issue raised. ZOC will wait for the communication from the mentioned association,” she said.

The FAA Championships, which took place from Friday to Sunday, is the highest level of competition for African archers and was also the African Continental Qualifying Tournament for the Olympic Games in Rio de Janeiro 2016, as well as the World Games in Wroclaw 2017.

Egypt once again showed it is the powerhouse of Africa in archery by winning four out of the six medals in the two individual recurve events.

South Africa’s Terence van Moerkerken was the only obstacle in the way of an all-Egyptian gold medal match, but he fell to a 6-4 defeat to Ahmed El-Nemr in his last-four tie.

With Ahmed El-Nemr due to meet Hady Elkholosy in the gold medal match, after his compatriot beat Mohammed Amin Aly 6-4, the Egyptian team secured the first Rio 2016 berth on offer.

As nations were only able to secure a maximum of one berth, the remaining two places were awarded to countries who were yet to have achieved quota spots.

Van Moerkerken, therefore, earned South Africa a place having reached the bronze medal contest, while having finished in fifth position, Sutherland earned a place for Zimbabwe.