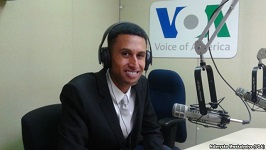 ZIMBABWE – WASHINGON, DC – Many stop dead in their tracks when they hear Hisham Breedlove belting out songs such as the traditional Catholic prayer, Ave Maria, and ballads like Somewhere Over the Rainbow.

It’s something to do with his voice – Breedlove is a classically-trained opera singer – more specifically – a countertenor, the male version of a soprano, and his pitch and range are wide and very high.

“I always knew I was going to be a singer,” Breedlove shared.

An interesting tit-bit about Breedlove is that he was born and raised in Zimbabwe’s capital, Harare.  A proud fact he flaunts easily.

“I 110% present myself as a Zimbabwean,” Breedlove declared, though he said many don’t believe him because of his mixed race appearance – his mother is of Indian and Zimbabwean heritage, while his father is an African American from Virginia.

He laughed, “I have to basically convince them I am Zimbabwean.”

Typically, ordinary people, whether or not they appreciate classical music, would not get to hear a trained opera singer like Breedlove perform, because they’d have to go to an opera theatre or similar venue, and pay a high price.

But because of Breedlove’s choice of venue or you could say ‘stage,’ – open spaces of any given public metro (train) station in the nation’s capital – anyone and everyone can hear him.

Random passersby often stop and stare, applaud, and as they pass, drop a few dollars in a make-shift money bag, at Breedlove’s feet.

This is how he pays his bills for now, but he also said it’s part of his preparation for a bigger stage.

“We [singers] tend to not want to get out there and practice, and get our practice in, but this gives me a fantastic venue to practice and I get paid for it,” breedlove said, laughing.

Breedlove traces his foundation in music, back to Zimbabwe.

“My basis of my classical training started in good old Zimbabwe, right there Harare, at Highland School, and I went on to Prince Edward School, where I did a couple of years,” he reminisced.

It was while at the local Harare high school, Prince Edward, at the young age of 12, that Breedlove said his career as a classical musician was pretty much sealed, when he auditioned for a part for a South African school.

“I was discovered by the Drakensberg Boys Choir in South Africa.  They had come down, and I auditioned, they invited me to attend the school, and so I left, did a few years there, I came back did my last years at Prince Edward, and went off to America for college.” he said

Breedlove landed in America 15-years ago with the goal of becoming a professional singer.

He’s on track, he said, having recently matriculated with his Masters in Voice from Morgan State University.  But he said the journey was not easy.

“I came to America with big dreams of pursuing a career in music, and you know naturally when you are young, you stumble and fall, here and there, but you know, the main lesson in life is to pick yourself up and to continue forward and go strong,” said Breedlove, adding “that’s exactly what I did.”

As part of picking himself up, Breedlove said he decided to be bold, and hence the decision to sing outside a metro station.

He said he got the idea after watching another singer do it, one day on his way to work at a restaurant.

“I headed over to work that day, and I happened to be about 30-minutes early, and lo and behold, I see a young woman singing on the metro!  She was singing some ethereal music, you know the kind you’d hear on the [movie] Lord of the Rings?” He continued, “she inspired me!” he said.

Breedlove said after watching her and seeing her make close to $30 in less than 10 minutes, he decided that is what he was going to do as well.

“So I went out the next day, and did really well,” he said, laughing.

Breedlove said his train station performances literally shaped his career, opening such doors as Washington Adventist University where he got a full scholarship to do his undergraduate after being recruited by a staff member.

Breedlove said his father had insisted that he attend Historically Black Colleges and Universities, or HBCUs, to learn more about his African American heritage.

He explained how his performances at the train station got him the scholarship, not long after he started trying it out.

“I kid you not, maybe a week after that, a gentleman came up to me and asked if I would be interested in auditioning for Washington Adventist University.”

Breedlove said that not only eventually led to his enrollment into that college, but also a performance at Carnergie Hall, one of the world’s renowned performance venues located in Manhattan, New York, where he shared the stage with John Rudder, “one of the most famous living composers in the world.”

Dreams of Returning To Zimbabwe

Despite all the time he’s spent in the U.S., Breedlove said he dreams of returning to Zimbabwe to perform, inspire others and even “provide some hungry Zimbabwean singers out there with opportunities here in the United States.”

Though from Zimbabwe, Breedlove does not sing in any of the nationally recognized languages, because, he explained; “I left when I was 12-years old, and we weren’t taught any Shona songs or Ndebele songs in the schools at that time, which I regret.  I wish they did,” he said, but added that he picked up “the mbira and karimba,” at least, the traditional musical instruments played in Zimbabwe.

Though he did not learn to sing in Shona or Ndebele, Breedlove said proudly that he did learn several songs in Xhosa, Zulu, Tswana, languages spoken in South Africa.

He said he took a particular liking to Quongqothwane, a song popularized by the late South African singer, Miriam Makeba, more popularly and simply known as the “click song,” and another song called, Shosholoza, which he sang in the VOA Studio, complete with ululations at the end.

Breedlove said he plans to take his music career as far as he can, but he stressed being a music is

harder than many people imagine.

“The training is very rigorous, it takes your whole life of practice, and you have to a teacher, or a vocal coach. Even the best, the finest singers out there have someone they coach with,” he said.

Breedlove said for now, he planned to continue doing what he’s been doing, as he strives to become the best opera singer out there – holding free concerts at a metro station near you.

ZIMBABWE - WASHINGON, DC - Many stop dead in their tracks when they hear Hisham Breedlove belting out songs such as the traditional Catholic prayer, Ave Maria, and ballads like Somewhere Over the Rainbow.  It’s something to do with his voice - Breedlov...
Share via
x
More Information