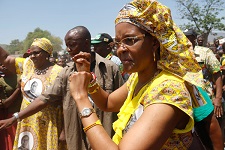 ZIMBABWE – Some Zimbabweans say First Lady’s Grace Mugabe’s attacks on senior government officials like Vice President Emmerson Mnangagwa is a clear indication that she in now gunning for the highest office in the land.

They say she wants to purge all those who she perceives as stumbling blocks in her ascendency to the presidency.

Some Zimbabweans say it is clear that the first lady is now inching closer to the country’s executive arm of the state as she wants to eliminate suspected enemies like Mnangagwa and members of his alleged Zanu PF faction calling itself Team Lacoste.

Several top Zanu PF officials aligned to this group have already been suspended in the Midlands province, viewed as Mnangagwa’s stronghold, and other regions.

Expelled former Zanu PF legislator, Themba Mliswa, who is also a co-ordinator of the Youth Advocacy for Reform and Democracy, said the first lady is currently eliminating perceived stumbling blocks as she is destined for the highest office in Zimbabwe.

Independent political commentator, Enerst Mudzengi, concurred, saying President Mugabe knows what his wife is doing as he is trying to secure the future of his family by ensuring that Mrs. Mugabe is in charge of the executive arm of the state.

Another independent political commentator, Fortune Gwaze, said while Mrs. Mugabe has in the past said she was not vying for the highest office, recent developments in Zanu PF point to a different direction.

But Mliswa said even if Mrs. Mugabe is appointed Zanu PF presidential candidate for the 2018 elections, she is not saleable to the electorate.

Another faction of the party calling itself Generation 40 is allegedly supporting Mrs. Mugabe’s moves.

Some ordinary Zimbabweans have criticized the first lady for her continued attack on Mnangagwa and some cabinet ministers saying this was affecting government operations.

Harare resident, Malvin Mukundu, said it is becoming difficult for Mnangagwa and his colleagues in the ruling party to discharge their duties whey they are constantly attacked and dressed down in public.

But  Zanu PF  activists, Henry Zhanje,  said there is nothing wrong about what the first lady is doing.

He says while there are some few individuals who are disgruntled, the majority of people in the ruling party were fully behind her.

Democractic Party leader Wurayayi Zembe, Mrs. Mugabe’s behavior was very questionable and expect the President Mugabe and Zanu PF to reign her in.

Mrs. Mugabe last Friday attacked Mnangagwa and his supporters accusing them of fanning factionalism and several other issues, among them attempting to kill her son Berlamine Chatunga, and corruption.

Speaking at the same rally, Vice President Phelekezela Mphoko said it was not given that a Karanga would succeed President Mugabe in a move that has drawn widespread criticism.

People’s Democratic Party spokesman, Jacob Mafume, said Mphoko’s comments were an insult to the whole ethnic group and was uncalled for as it sets the country on a dangerous path.

DP’s Zembe said presidents in Zimbabwe are not elected on tribal lines and Mphoko must be charged for failing to defend the constitution as his utterances promote tribalism.

Do Not Take The Law Into Own Hands, Police Warn The Public

ZIMBABWE - Some Zimbabweans say First Lady’s Grace Mugabe’s attacks on senior government officials like Vice President Emmerson Mnangagwa is a clear indication that she in now gunning for the highest office in the land. They say she wants to purge all ...
Share via
x
More Information
x