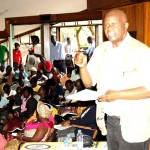 Presenting his $4 billion budget to parliament Thursday, Chinamasa said Zimbabwe would repay $1.8 billion in debt to multilateral lenders such the World Bank, IMF and African Development Bank in the first half of next year. Zimbabwe lost its borrowing and voting rights in the IMF and World Bank in 2003.

“It’s expected that financial support from the IMF and World Bank, along with other development partners, will resume in 2016,” he said.

Zimbabwe will set legal limits on its indigenization laws that require foreign companies to cede as much as 51 percent to blacks, Chinamasa said. A new law will be published before the end of this year that will “eliminate discretionary application,” he said.

About 82 percent of Zimbabwe’s revenue goes to salaries and wages, and 92 percent to recurrent costs, leaving ”only eight percent for capital expenditure,” he said. “The bulk of the budget is taken by employment costs that aren’t sustainable.”

The government will finance a $150 million deficit through domestic borrowing, he said.

The economy shrank by about 40 percent between 2000 and 2009 after President Robert Mugabe’s Zimbabwe African National Union-Patriotic Front backed an often-violent seizure of most of the country’s white-owned farms.

The move left the country reliant on mineral exports, even as miners battled dwindling electricity supplies. Zimbabwe sits on the world’s second-largest known deposits of platinum metals and chrome after neighboring South Africa.

Things you may not know about Robert Mugabe