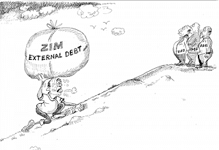 ZIMBABWE – It may be hard to believe, but Zimbabwe’s debt is not that high. With a total debt of $8.4b and a gross domestic product (GDP) of about $13.8b, our debt represents only 60 percent of our GDP. In Japan it is 230 percent, and China’s debt burden is 280 percent. So what is Zimbabwe’s debt problem?

First, Zimbabwe does not qualify for debt relief under the Highly Indebted Poor Country Initiative or the Multilateral Debt Relief Initiative. Second, unlike China, growth in our comatose economy is far too slow to pull ourselves out of debt. Third, because we use the US dollar, we cannot print our own money – thankfully. But fourth – and unforgiveable in international financial circles – we have made no effort to repay our debts. Eighty percent of our external debts are now in arrears. Some go as far back as 1999. When the government reneged on one debt, it went cap in hand to borrow from someone else. When the government’s $3b debt to Western bilateral financial institutions fell into arrears, it turned to China. Now Zimbabwe is also $150m in arrears to China. The bottom line is that our government has behaved so badly and betrayed their trust so often, that nobody is prepared to lend us a cent.

With nowhere to turn to borrow money, and with the economy about to implode, the government is scrambling around trying to make friends with those that it has contemptuously abused for so long. In its desperation to fill the gaping holes in its budget, the government understands that it has to kiss and make up with the IMF. It knows that it must first repay arrears to the international financial institutions, notably the IMF, the World Bank, and the African Development Bank. So, with much fanfare, the government has embarked on its much-vaunted debt arrears clearance strategy.

Its strategy is based on crafting “alternative and innovative financing arrangements” to clear the $1.8b in arrears that is owes to these three key international financial institutions. The clever part is that the government will only actually pay $111m, which is to the IMF. It will then borrow $601m from regional and international banks to pay the African Development Bank, and negotiate another $1.1b loan to clear the arrears owed to the World Bank.

But hold on a minute: Does that make sense? The government borrows $1.7b to pay off a $1.8b debt? Is it really possible to imagine any bank lending us any money to pay the Bretton Woods institutions when Zimbabwe still owes $3b to its bilateral creditors – and when we have virtually no capacity to pay our own civil servants, diplomats, and domestic creditors? How will Zimbabwe ever be able to pay back the banks for these new loans? Actually, come to think of it, this strategy makes no sense at all. In fact, it is not remotely credible and is so ludicrous that it borders on the delusional. But, then again, when has that ever stopped the ruling party from claiming the impossible to deceive and delude the people of Zimbabwe? The best way to delude others, it is said, is to first delude oneself. This was evidently accomplished by the Finance Minister when he turned a deaf ear to those whose opinions matter most.

For all its so-called ‘consultation’, the government – as usual – refused to listen. In a departing shot, the outgoing US Ambassador said that the United States would not support Zimbabwe’s debt clearance strategy unless the government of Zimbabwe implemented far-reaching economic and political reforms. Does this matter? It not only matters a great deal, but it is the lynchpin in a doomed strategy. The Zimbabwe Democracy and Economic Recovery Act requires the United States executive director of each international financial institution – including the IMF and World Bank – to oppose and vote against any extension of any loan, credit, or guarantee to the Government of Zimbabwe. They are also required by US law to oppose and vote against any cancellation or reduction of indebtedness owed by the Government of Zimbabwe to the United States or any international financial institution. Is that clear enough?

When the United States means ‘far-reaching’ reforms, they not only mean the essential reforms to the economy, such as property rights, but Zimbabwe’s full commitment to political reforms, especially human rights and the rule of law. On this score, we are not even close to political reform. Last month alone the police failed to charge ZANU(PF) perpetrators when they attacked MDC supporters in Hopley. Soldiers beat former ZBC workers who were seeking redress after they had been illegally retrenched and had not been paid. And the police brutally assaulted and arrested students who had staged a peaceful demonstration. Most chilling of all, however, has been the fear spread by the abduction and disappearance of Itai Dzamara.

Yet, as if nothing were amiss, the Finance Minister blithely went on to explain the rest of his strategy. The final step for debt resolution, he says, is to engage with the Paris club (the West) and other bilateral creditors. And what is his brilliant solution? Debt relief! He seems to imagine that after paying the international financial institutions their full amount that, somehow, other creditors will happily forgive Zimbabwe the remainder of our debt to them. If we have any doubts about the thumb-screws that creditors will apply to Zimbabwe – we only have to look at how they are squeezing Greece and Argentina. There will be no let up.

But none of this concerns our cheery Finance Minister. Once our debt is cleared, he said, Zimbabwe can inject fresh capital into the economy. There will be no need to worry about the indigenisation policy, which will be clarified – yet again. There will be no need to worry about our compromised, inefficient and unreformed state enterprises building up massive new debts. Nor will there be a need to worry about Zimbabwe’s capacity to grow itself out of debt. Investment, our government promises, will flood in and, in the words of the Minister, propel the economy into a new phase of sustained growth.

Unfortunately, this is pure fantasy, like ZimAsset in Wonderland, which ZANU(PF) invented just before the July 2013 election. It absurdly claimed that the government would access $27b to liquidate all government’s debts, create 2.2 million jobs, build 300,000 low-cost houses, upgrade 32,000km of rural roads, and reach a mind-boggling economic growth rate of 9.9 percent by 2018. Sadly, the Finance Minister continually refers to ZimAsset in his budget speech – as if he actually believes that it is worth more than the paper it is written on.

As former US Ambassador Wharton said, there is no need to scratch our heads or come up with some convoluted and unworkable financial arrangement. All that is necessary is to respect property rights, restore the rule of law, and ‘clarify’ investment policy. The problem is that ZANU(PF) cannot possibly implement these changes. Why? For the simple reason that its hegemonic political power is based on capturing state institutions to allocate economic resources – from jobs and hand-outs to farms, mines and businesses – in order to sustain party loyalty through its insidious patronage system.

We should not be waiting for the IMF or the United States or Britain to tell us what do it. We should, of our own volition, immediately restore the rule of law, scrap the indigenisation law, and put in place iron-clad guarantees to protect investors’ property rights. We should send an unmistakeable signal to investors’ that we welcome their technology and expertise, along with their funds. This should be just the beginning of building an open, competitive, and market-based economy driven by the private sector.

ZIMBABWE - It may be hard to believe, but Zimbabwe’s debt is not that high. With a total debt of $8.4b and a gross domestic product (GDP) of about $13.8b, our debt represents only 60 percent of our GDP. In Japan it is 230 percent, and China’s debt burd...
Share via
x
More Information
x