ZIMBABWE – The head of Australia’s players’ union has made a radical proposal to introduce a transfer system to “better utilise unemployed Test-quality players”, suggesting a star such as unwanted England batsman Kevin Pietersen could be retained on the international scene by playing for a country such as Zimbabwe.

The recommendation is contained among a series of suggestions to enhance the international game in the Australian Cricketers’ Association’s newly released annual report. In his report that opens the document, ACA president Greg Dyer also calls for the establishment of an ICC Test championship to enliven the five-day game and celebrates the removal of ICC chairman Narayanaswami Srinivasan.

However, the most eye-catching of the 10 recommendations is for the introduction of a system whereby the likes of Pietersen, whose cards have been marked for life by England, could resume his international career with another nation.

Free agent: No longer part of England’s Test plans, Kevin Pietersen could be signed up by other nations under the new proposal.

Dyer, who represents hundreds of leading male and female cricketers via the ACA, argues that the ICC should “create a controlled and targeted international player transfer system, irrespective of passport qualification, aimed at levelling out the playing strength of all Test countries and better utilising otherwise unemployed Test-quality players.

“Say, a maximum of three internationals per team and with a minimum three-year commitment required. (Think Kevin Pietersen playing for Zimbabwe?).”

Such a policy would serve as a dramatic upheaval to ICC player eligibility rules that underpin the international game. Those regulations state that to represent a country a player must either be born in that country, be a national of that country or be a resident in the country. The rules also state that a player must not have represented another nation in the previous four years. Dyer’s idea will be shouted down by many but he has suggested it against the backdrop of an international scene that is increasingly a more uneven playing field.

Under the left-field plan, someone such as Adam Voges could have been headhunted by another nation rather than having to wait  for years for a Test debut.

A  similarity could be drawn with the rules that govern international rugby league, whereby players are able to change allegiances between World Cups every four years – NFL convert Jarryd Hayne, for instance, has represented Fiji and Australia. However, the sticking point is  they must meet eligibility rules based on birth, heritage or residency for whatever country they play.

The proposal effectively throws out the rule book on international sport and there are many unanswered questions. Would players actually want to represent another country, even if they could not get a start for their own? And, to use Voges as an example, would they  then be able to come back when their nation of origin wanted them?  It’s a concept that in all probability won’t result in anything more than water-cooler talk but the fact it has been delivered by the top representative of Australia’s players makes it impossible to ignore.

More likely to see the light of day, although it has disappeared from the ICC’s plans, is the resurrection of the Test championship. Two years ago the ICC announced an inaugural event to be staged in England in 2017 and a second tournament in India in 2021, with the Champions Trophy to be replaced, but it was later scrapped.

Dyer believes every match would be made more relevant by creating a “Test Cricket Championship across two-year cycles, with home-and-away points leading to a four-team finals series”.

He adds: “This is clearly not a new idea, but will require a return to an agreed Future Tours Program involving all countries. It will also require a longer-term approach extending beyond the bilateral agreements that are currently in place …”

Dyer also suggests that more substantial prizemoney should be made available for every Test so that “the majority of all players’ income is delivered by playing this form of the game”. And in a call that will resonate with the West Indies after their all-too-brief lead-in to their series in Australia, he says Test teams should never be allowed “to commence a Test series without at least two serious, true first-class lead-up matches”.

There is also special mention of the departed ICC chairman, who was removed from the post by the Indian board in November. Dyer opens his report by saying: “As I write, I am enjoying a quiet celebration over the removal of N.Srinivasan”, although he concedes that development will probably not lead to cricket’s big-three structure being unwound.

“Realistically, Srinivasan’s ignominious departure is unlikely to undo the impact of the 2014 creation of the India/England/Australia troika, which now dominates the ICC club.” 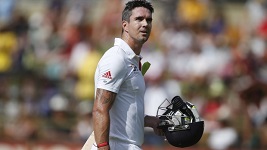 ZIMBABWE - The head of Australia's players' union has made a radical proposal to introduce a transfer system to 'better utilise unemployed Test-quality players', suggesting a star such as unwanted England batsman Kevin Pietersen could be retained on th...
Share via
x
More Information
x