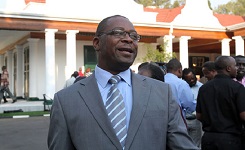 A Cabinet minister says they have no more land to parcel out to new farmers in Zimbabwe, and what is left must be kept in reserve.

It was 16 years ago that land invasions, led by war veterans, marked the start of the fast track land reform exercise.

A state newspaper says that exercise is now almost complete, and Zimbabwe has virtually no land left to distribute to its new farmers.

In all, 14,5 million hectares of land has been handed over to new owners.

Lands Minister Douglas Mombeshora told that the 900,000 hectares left will be kept by the government in reserve.

The minister says the focus will now move to carrying out a land audit to check whether the land’s being properly used by its new owners.

ZIMBABWE  - Sixteen years after President Robert Mugabe launched a controversial land reform programme, officials say the exercise is now almost complete. A Cabinet minister says they have no more land to parcel out to new farmers in Zimbabwe, and what is...
Share via
x
More Information