ZIMBABWE – This was a year most employees would love to forget like a bout of malaria. That cuts across all sectors of the economy, not just civil servants who for the first time were forced to forgo their annual bonus. In the private sector workers became victims of the notorious July 17 court ruling that employers could dismiss their employees on three months’ notice.

Most of those affected were sent away without terminal benefits, let alone talk of a bonus.

But what is emerging from social media discussions, now a major forum to gauge public sentiment, is that Government should rethink the issue of annual bonuses to its nearly a quarter of a million employees in view of fast shrinking revenues and the demands of productive investment in public infrastructure and social services. Direct salaries on their own have become something of a huge burden without factoring in gratuitous end of year bonuses.

Part of the solution has been for Government to freeze salary increases, stop new recruitments or not replace employees who either retire or pass on, as a way of containing the wage bill. No doubt the IMF’s SMP is coming up with its own austerities to rein in recurrent expenditure estimated at 83 percent of revenue. That’s not sustainable for a developing economy.

It was in light of these factors that we felt calls by civil servants for industrial action for delayed payment of salaries and bonuses were ill-advised. The cash crisis goes far beyond Government. There would be little to be gained from further disruptive strikes besides engendering ill-will and resentment between Government and its employees.

But the MDC-T did not disappoint. They reacted like soldiers of fortune, inciting, egging and instigating the civil servants to strike. Their focus is power, not how to grow the economy. Like sharks, they hunt in troubled waters.

The reaction was infantile and irresponsible. It is one thing to empathise with Government workers, it is quite another to incite, instigate or abate calls for public anarchy in the hope of bringing down an elected Government. It shows an opposition not yet ready to govern. It is an opposition still enjoying the exciting honeymoon of student politics. From their behaviour regarding serious national issues, they forfeit the moral ground of an opposition ready to form an alternative government. They are only too eager to be an opportunistic substitute to zanu-PF.

No serious opposition with clear policies wants to ride on a wave of anarchy to power. That’s what we take of them into 2016.

And that is fairly consistent, let’s give it to them. They cannot think of confronting zanu-PF alone even in the 2018 elections. They require a coalition to lend them gravitas. In this they have the support of fusionists among “analysts” and their media and foreign advisors.

Here is a once formidable opposition party which, however, opted to democratically recall its members from Parliament without intending to replace them. It now turns around to accuse zanu-PF of abusing its parliamentary majority to pass unpopular legislation!

It’s a party in desperate need of handholding.

It is a terrible indictment of the MDC-T that in the midst of an internal storm in zanu-PF few Zimbabweans see them as an alternative. Instead, attention has shifted to a straw only identified as People First which has not yet taken a corporeal form. Shouldn’t a warring zanu-PF have given the MDC-T the illusion of something larger, even if only temporarily?

President Mugabe recently called for an end to internecine zanu-PF wars. He warned such fights threatened to split the party. That warning seems to have gone unheeded given the goings-on since the recent People’s Conference in Victoria Falls.

The real national concern in not only zanu-PF fighting itself and the risk of a split. The real concern is the ruling party is not fulfilling the mandate given to it by the people to intimately attend to the affairs of the state. That mandate appears to have been relegated to the backburner.

Way before talk of a strike by civil servants over their delayed pay, concerns had been raised that there was little communication between them and their employer. They had become a secondary matter to the internal wars. They didn’t feel their situation was getting due regard. The opposition sought to make a meal out of this; to cement the impression of an uncaring employer, hence the rush to say “we support the strike by civil servants”.

To these opportunists it matters not how many patients die as a result of a strike or how many students are prejudiced for life by such industrial action so long as it can all be blamed on zanu-PF.

Which is to say in short, zanu-PF should get itself back on track and execute its national mandate. It’s appreciated that mega deals signed with China, Russia, Brazil and Belarus won’t transform the economy in a day. But Government must be seen to be all attention. zanu-PF and Government must be seen to be committing time to the implementation of Zim-Asset. At the moment there is more noise generated by the party’s internal wars than from hammers in industry.

A damaging legacy of the Cold War is that we must fight proxy wars even against our own best interests. Those of the major powers come first, in the hope that we benefit from the trickledown effects.

So it was that last week the devil’s workshop gave us the shock news of the sudden withdrawal of the US dollar from circulation, to be immediately replaced by the less familiar Chinese yuan. Tellingly, the devil advised depositors to immediately rush to their banks to withdraw all their savings before they were converted into yuan accounts.

Reserve of Zimbabwe governor Dr John Mangudya rightly described this devil’s yarn as an act of economic sabotage, a yarn invented to cause chaos, alarm, panic and despondency. One gets the impression that this is the same brain which caused capital fight as soon as news filtered through that zanu-PF had overwhelmingly won the harmonized elections of 2013.

It is the same brains campaigning against the land reform and economic empowerment programmes to protect foreign interests. It is the same brains which inform the logic that a temporary job as a labourer on a farm owned by a white farmer is more important than owning the farm and producing your own food.

Government announced earlier this year the inclusion of the Chinese yuan in the basket of nine currencies which can be used as legal tender in Zimbabwe. This was a public announcement, not a leak by WikiLeaks.

Then early in December the IMF itself put the same yuan among global reserve currencies. No economist warned us about the “risks” of the IMF’s decision. Yet those “risks’ only exist to the extent of the turf wars for control of international commerce by the big powers. We immediately jump into the ring in defence of the US dollar against the Chinese yuan.

We are indeed a very conservative lot. The same lot which initially rejected bond coins for the love of the Rand.

As promised last week, let’s revert to Cross. He is an angry man. Angry on behalf of his tribesmen. Angry at zanu-PF, adjudged, according to the man, more sinning than colonial occupation and theft. Like Rhodes, he loves land more than kaffirs who work it. Forget about your reconciliation.

This should jolt not only zanu-PF but Zimbabwe, out of its comfort zone. He has a surprise which shocks.

In his article in the Zimbabwe Independent of December 18, Cross indicates the land war is far from over and Zimbabwe owes whites a huge liability.

He says at the start of the land “invasions” in 2000 there were 12 million hectares under private ownership — “something like 10 000 title deeds in large-scale farming areas and 25 000 in small-scale farming areas. In the former there were 4 800 white farmers, 83 percent of whom had bought their farms for cash at Independence in 1980 . . .”

Until 2000, he claims, “there was no intent on the part of the state to disturb or reform the large-scale farming sector”.

Never mind that the Land Acquisition Act was initiated around 1991. You wish Kangai were alive to recap his fight with white commercial farmers over land at their conference in 1994 or 95.

In the interest of space, here is your bill Zimbabwe: by 2005, says Cross, “over 90 percent of all white commercial farmers had been forcibly and illegally evicted from their farms and homes leaving behind 10 000 farm dams, 260 000 hectares of established irrigation capacity, 25 000 tractors of 65 horse power or more and a great deal of fixed and moveable assets worth a conservative US$10 billion.”

In total, Cross tells us, the fast-track land reform created “a future liability for compensation that legally could be as great as US$30 to US$40 billion.”

Anyone who deludes himself that those bills are meant for zanu-PF alone, and not Zimbabwe, is beyond redemption. No wonder, too, that the EU is interested in funding a land audit when it is against the land reform. There are people with title deeds waging a reverse war. 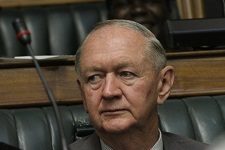 Zimbabwe's land war far from over

ZIMBABWE - This was a year most employees would love to forget like a bout of malaria. That cuts across all sectors of the economy, not just civil servants who for the first time were forced to forgo their annual bonus. In the private sector workers became...
Share via
x
More Information
x