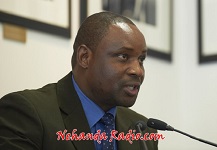 ZIMBABWE – Without any warning, Ndaizivei (not her real name) asks “Dad, why are you so passionate about Zimbabwe? Why would you ever want to live there?” Dad turns his head, looks at the innocent eleven-year-old girl straight in the eyes. Unfortunately for him, the little girl isn’t retreating.

Before he says anything, she continues “There is no electricity, there is no water, the roads are dangerous, everything is run down and people are all over the streets, selling something or doing nothing, do you really want to be in that situation?”

Dad takes another look at his girl, this time with little confidence. Forcing his voice through a lump forming on the throat, he asks “What are you talking about? Don’t you have homework to do? Have you done the dishes?” But the little one isn’t giving up.

“Dad, Mugabe has destroyed your country and he is still your president. Do you like him? Instead of you going back to Zimbabwe, why don’t we bring our whole family here, nana gogo (including my grannies)? When I grow up, I will look after you, I love you, Dad”.

This is the pain many parents in the Diaspora have to endure as we deal with the anxiety of a generation that was either born or brought up in other countries, most with functional democracy, working economies and effective service delivery structures and systems.

When those of us who still have vivid memories of how beautiful Zimbabwe was, how reliable and hardworking the people were, how great the nation was and how promising the economy was, talking to our privileged kids about this past, they think we are a bunch of crazy people. And this is understandable.

Unlike us, their knowledge or appreciation of Zimbabwe is not from a historical perspective. What they know and what they believe is informed by what is happening today in Zimbabwe. They find it strange that at their tender ages, they have known a couple of former prime ministers or presidents in their respective countries of residence or naturalisation.

In contrast, their parents, some of whom were teenagers at independence and now old enough to be grannies, have only known Ian Smith and Robert Mugabe, twin tyrants and legendary devils of our time!

When Dad thinks Ndaizivei is done with the frustrating topic, she picks from where she left; “Do you know that Tony Abbot (deposed Australian prime minister) is no longer the prime minster? There is this new guy who looks really cool. Anyway, how old is Mugabe and when will somebody else be the president?”

ZANU PF doesn’t know nor appreciate the pain and burden we go through in explaining, at times even defending their madness to what I would call Zimbabwe’s lost generation, our Diaspora kids. Parents have often gone out of their way to take children to Zimbabwe so they can have some attachment with their originality.

Sadly, the more we do it, the more they lose interest in the country. They just can’t see any light at the end of the tunnel. In a dead economy, they can’t understand why kids should be sent home for school fees. Indeed, our lost generation!

Unfortunately for us parents, we only have one country; that is Zimbabwe. No matter how terrible or miserable things are, it remains our country and the only one for that matter. It is for this reason that we continue to aspire and fight for a better Zimbabwe, a new Zimbabwe.

Not only a Zimbabwe without Robert Mugabe as the iron fist ruler, but one that enjoys and respects genuine freedom, democracy, equality and prosperity. Our strong desire is to end the nightmare of the past 35 years and steer the potentially great nation into a totally different direction.

Zimbabwe is not, must not and shall never be a monarchy. It can’t be the North Korea of Africa nor King Mswati’s Swaziland. It is not anyone’s private business. Those who want to see ZANU PF ruling forever or Mugabe running the country from his grave, must take their dream elsewhere.

As a nation, we have reached a point in time when everything possible must be done to stop reckless morons and dangerous lunatics from occupying State House. It is in this context that all genuine democratic forces must come together and confront the devil. The time is now.

Lastly, allow me to express my sincere and heartfelt condolences to Jonathan Moyo and his family for their tragic loss. I hope Zanele, having been afforded such a moving send-off by multitudes of mourners, is resting in eternal peace, wherever she is.

However, instead of our police wasting time and resources investigating Zanele’s death whose body everybody knows where it is interred, they must ramp up their effort to retrieve Itai Dzamara from his state-sponsored abductors.

He or at least his remains must be brought back to his family. All lives are equal, none is more equal than the other. Zimbabweans, particularly the Dzamaras, must also have closure.

ZIMBABWE - Without any warning, Ndaizivei (not her real name) asks “Dad, why are you so passionate about Zimbabwe? Why would you ever want to live there?” Dad turns his head, looks at the innocent eleven-year-old girl straight in the eyes. Unfortunatel...
Share via
x
More Information