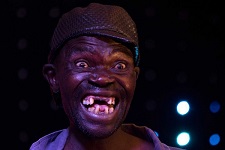 ZIMBABWE – A man in Zimbabwe has proven being dentally-challenged is an endearing quality in certain pageants.

Maison Sere, a 42-year-old unemployed man missing several teeth, was crowned Zimbabwe’s ugliest man at a pub pageant in Harare — but the contest turned ugly when the runner-up accused judges of bias.

Dressed in torn overalls, Mr Sere beat off five other contestants for the $500 Mr Ugly prize — a large sum in a country facing massive unemployment.

“I want to thank God for winning this title, last time I came fourth. I just want to thank the judges for recognising me as the winner,” Mr Sere told journalists during a night of festivities on Friday attended by 200 revellers.

But William Masvinu, a three-time Mr Ugly winner who walked off with a $100 second prize this year, cried foul.

“The judges were not fair, the organisers must look for new judges to start the contest afresh. I did not lose today,” Mr Masvinu said.

Show organiser David Machowa said he created the pageant in 2012 to celebrate “beauty in ugliness”.

“The show last night was very successful, and I still have plans to host Mr Ugly world,” he said.

ZIMBABWE - A man in Zimbabwe has proven being dentally-challenged is an endearing quality in certain pageants. Maison Sere, a 42-year-old unemployed man missing several teeth, was crowned Zimbabwe's ugliest man at a pub pageant in Harare — but the conte...
Share via
x
More Information