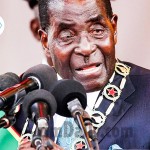 ZIMBABWE – HARARE Zimbabwe President Robert Mugabe announced his third cabinet reshuffle in less than a year on Friday, appointing his nephew as minister in charge of a government push to give blacks greater control of the economy.

Patrick Zhuwawo takes over as Minister of Youth, Indigenisation and Economic Empowerment in place of Christopher Mushohwe, who assumes the information portfolio.

Zhuwawo becomes the third person to lead the empowerment ministry since Mugabe and his party won elections in 2013, heading up the drive to force foreign-owned firms, including mines, to sell at least 51 percent of their shares to locals.

Mugabe rarely reshuffles his cabinet, preferring to stick to close allies, especially those who fought alongside him during Zimbabwe’s 1970s independence war against white-minority rule.

Last December, the 91-year-old fired his deputy of 10 years, Joice Mujuru, and several ministers aligned to her in what political analysts said was meant to quell simmering tensions over his future successor.

However, Mujuru’s ejection has not ended tensions within the ruling ZANU-PF party over who will eventually take over from Mugabe, Zimbabwe’s only ruler since independence from Britain in 1980.

Mugabe also named 10 new deputy ministers, some of them close allies of Vice President Emmerson Mnangagwa, who is now seen as Mugabe’s most likely successor.

ZIMBABWE - HARARE Zimbabwe President Robert Mugabe announced his third cabinet reshuffle in less than a year on Friday, appointing his nephew as minister in charge of a government push to give blacks greater control of the economy. Patrick Zhuwawo takes ov...
Share via
x
More Information