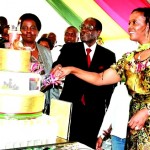 ZIMBABWE – Reports coming out of Harare say the ruling party has begun organizing a birthday bash for President Robert Mugabe, who turns 92 next month. Robert Mugabe was Born February 21, 1924 (age 91), Kutama, and Zimbabwe.

ZANU-PF provincial chairman Ezra Chadzamira told the Wednesday edition of the state-owned Herald newspaper that the celebrations will be held in the southeastern Masvingo province for the first time.

Mugabe’s birthday parties are held in stadiums where thousands of supporters gather. The celebrations are usually held under the banner of the 21st February Movement, a youth branch of the ruling party named after the date of Mugabe’s birthday.

The president’s office has confirmed that the Comrade is well on holiday in the Far East, without specifying which country the president is visiting with his family.

Mugabe, one of Africa’s longest serving rulers, has been in power since 1980, when white minority rule ended in Zimbabwe.

The resurgence of political violence