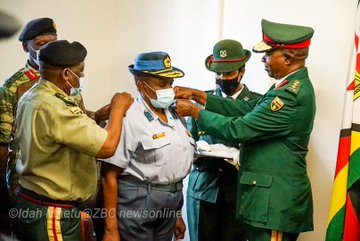 HARARE – Air Force of Zimbabwe senior officer Winnie Mandeya yesterday made history as she took oath as Zimbabwe Defence Forces first woman to reach the rank of Air Vice Marshal, a rank equivalent to a Major General in land forces.

As she assumed her new role, she committed herself to work for the well-being of Zimbabweans, especially on issues affecting women, their empowerment and inclusion.

She was promoted along with fellow Air Commodore Patrick Moyo. The promotions are effective from July 1 and August 1 respectively.

Congratulating the promoted air vice marshals, General Sibanda said the elevation demonstrated the trust that the President had in the officers.

“I welcome you aboard to the new level of command. You are commanders in the new level and this came after your hard work that you have brewed into the system in the organisation and through the recommendation of the commander, that the President saw it fit for you to be promoted.

“There is that expectation which is supposed to come from you and you should always bear in mind that there are subordinates who are under you and your commanders contributed to your promotion,” said General Sibanda.

AVM Mandeya said it was impressive to note that the ZDF was walking the talk in the upliftment of women even calling for more inclusion of women in all spheres.

“It should be our combined endeavour to sustain growth of women involvement and ensure that it is socially inclusive. We must ensure that every section of our society, particularly the disadvantaged, are equal partners in, and beneficiaries of the development process,”she said.

In an admission that her military career has been sudden and unexpected, AVM Mandeya said she knew what awaited her.

“I am fully aware of the great responsibilities placed on my humble shoulders. I will continue to do the best like I have done before,” she said.

AVM Moyo thanked the ZDF command for the recognition and pledged to remain loyal to both the organisation and the country.

HARARE - Air Force of Zimbabwe senior officer Winnie Mandeya yesterday made history as she took oath as Zimbabwe Defence Forces first woman to reach the rank of Air Vice Marshal, a rank equivalent to a Major General in land forces. As she assumed her new r...
Share via
x
More Information