He will probably try again when he assembles his squad for the next 2017 Africa Cup of Nations qualifiers, but chances are few his call will be answered this time either.

Macauley has already been capped by the Warriors and represents the biggest hope of Zimbabwe managing to tap into some of its talent in the English leagues.

While prospects of Darikwa heeding a Warriors call have been diminishing with the growth of his impression in England, chances of Brendan Zibusiso Galloway of English Premier League (EPL) side Everton playing for Zimbabwe seem to have extinguished the day he turned out for England’s Under-21.

There has been a rise in players either born of Zimbabwean parents or who were born in the country, but moved with their parents to the United Kingdom, or other countries.

These players have represented the best chance of the Warriors squad being laced by EPL players.

Yet these players have generally shunned the opportunity to represent their country, preferring to wait patiently for a chance to play for England.

Since the turn of the millennium, the movement of Zimbabweans into Britain in search of greener pastures has seen an increase in the number young players with their roots in Zimbabwe making an impact at various clubs in the UK.

Probably the most famous of the young Zimbabwean-born players dotted around England at the moment is Everton defender Galloway, who last month signed a new improved contract which keeps him at the English Premiership club until June 2020.

The 19-year-old left-back was signed from MK Dons two years ago, but rose to prominence early this season in the absence of injured teammates Leighton Baines and Bryan Oviedo, with performances that earned him a call up to the England Under-21s and he didn’t even take time to ponder about his roots.

Before his move to Everton, Galloway had written his own piece of history in 2011 when, at just 15 years of age, he became the youngest player ever to play for MK Dons, who ply their trade in League One.

A year later, Galloway was included in England’s Under-17 squad for the Nordic tournament, which was held in the Faroe Islands.
The young player later told our sister paper The Standard that although his heart was still with Zimbabwe, he found the England call-up irresistible.

“I do not know yet if I will play for Zimbabwe. I will have to see what happens, but for now, I am going to play for the England Under-17 team,” Galloway said.

Under current Fifa rules, Galloway is eligible to play for either Zimbabwe or England, having been raised in Harare where he attended St Michael’s Primary School before his family immigrated to England when he was six years old.

However, after his superb rise in English football, it is now highly unlikely that he will consider donning the Warriors jersey, with the prospects of playing for the England senior side having brightly blossomed.

Last week, defender Darikwa, at Championship side Burnley, was being linked with a move to Premiership side West Ham United.
High-flying Leicester City are also reportedly eying Darikwa, while West Bromwich Albion are also believed to be keeping tabs on the versatile defender.

With so much interest, his chances of breaking into England also brighten up, particularly with age on his side.

Last month, another Zimbabwean, Kuda Muskwe, signed a two-year professional contract with the English Championship club Rotherham, while Macauley is also enjoying his game at Colchester, even though his team is struggling and facing relegation.

England is also the home of promising young midfielder Munyaradzi Mbanje, who is on a two-year scholarship at former English Premiership side Leeds United.

Over the past few years, Zimbabwean football has fallen in an abyss of debt and maladministration, which resulted in the Warriors’ expulsion from the 2018 Fifa World Cup qualifiers for failing to pay former coach Valinhos.

However, the coming of the new Zifa board led by Harare businessman Phillip Chiyangwa has led to some hope that local football could be headed for a recovery path.

The new board is working hard to make an impression and if they could lure some of the Diaspora talent, that would be quite some success to record.

But as Afcon qualifiers beckon, Zimbabwe can only drool at some of the talent that could make the Warriors team sheet much more impressive, if not also intimidating.

Continental football powerhouses like Nigeria, Ghana, Ivory Coast and Senegal have in the past managed to lure back some of their talent previously lost under the same circumstances as Zimbabwe.

Europe possesses the resources and expertise to develop young talent and Zimbabwe can only get better by tapping into more Europe-based talent instead of only looking across the border in South Africa. 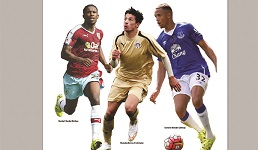