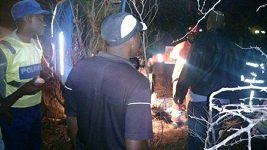 According to the Army Public Relations Director Alphios Makotore, Colonel Matema died yesterday morning together with his wife Patricia when his vehicle was involved in an accident at the Gokwe–Empress Mine turn off near Kwekwe.

“A Kwekwe bound heavy vehicle rammed into his stationary vehicle at the intersection crashing the couple inside their car,” he said. “Mourners are gathered at his home at house number 5010 Mkoba 15 in Gweru.”

Lieutenant Colonel Makotore said burial arrangements would be announced in due course.

The late colonel is survived by five children.

“A full military funeral in honour of the senior officer will be held tomorrow at the Zimbabwe Military Academy in Gweru at 1100 hours. The Commander Zimbabwe National Army Lieutenant General Philip Valerio Sibanda will be the chief mourner at the funeral parade.”